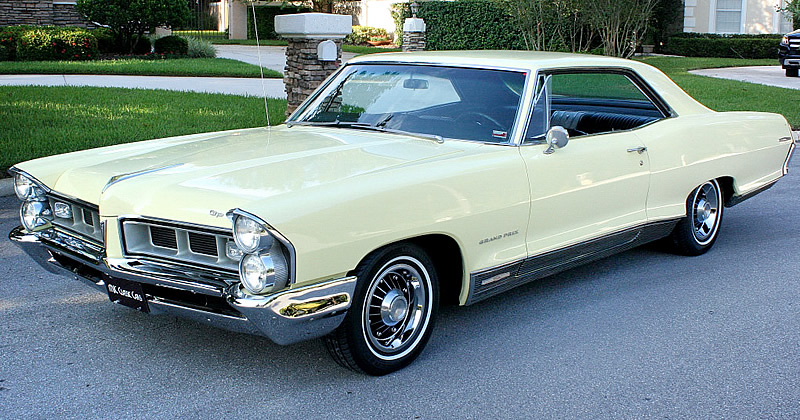 Based on the Catalina body the Grand Prix was probably the most distinctive of the full-size Pontiacs of 1965.  This, new-for-1965 body was dressed up with exclusive Grand Prix grille, grilled-over taillamps, fender skirts and special identification badges. Behind the front wheel opening was a Grand Prix nameplate and the rear fender featured a badge.

This personal luxury car was only available as a hardtop coupe and features ‘coke-bottle’ styling as you can see from this side/rear shot.

Those great lines as well as some great engineering resulted in the entire Pontiac line receiving the Motor Trend Car of the Year award.

The desirable aluminum 8 lub wheels  were a $120 factory option.

Inside you’ll find the optional bucket seats with all-Morrokide expanded vinyl. There were a total of nine colors available that year.

The 389 V8 with 3 speed manual transmission was standard on both the Grand Prix and Bonneville that year. The original owner of this car opted for an automatic transmission which would have cost him an additional $365.

Other options on this car include power steering and brakes costing $97 and $43 respectively. The AM radio would also have cost a further $61 when this car was ordered new. The big expense would have been the air conditioning that came in at $430.