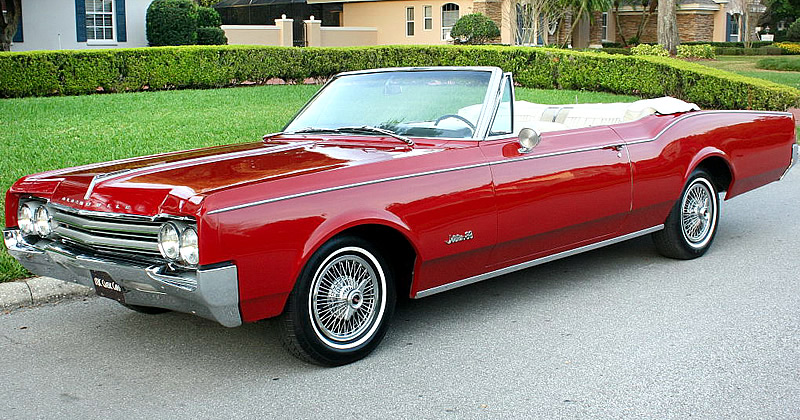 Jetstar was a name introduced as a new series in 1964 as a Jetstar 88 which was the entry level full-size Oldsmobile and the Jetstar 1 that was essentially a Starfire with less features.

The 1965 Jetstar 88 Convertible (looking great in Target Red)  you see here is essentially a base Eighty-Eight that sat above the Cutlass range. These full-sized Oldsmobile were subject to a full restyle that year with completely new bodies, bringing the Eighty-Eight into its sixth generation.  They had produced a very good looking big car with great lines and minimal chrome.

At the rear there was a new, great looking, sculpted panel with new taillights that followed the revised shape.

Inside there is an all vinyl interior with plenty of brightwork on the instrument panel and “Jetstar 88” emblem on the glovebox.

Under the hood there is 330 cubic inch Jetstar Rocket V8 engine outputting 260 horsepower. This came standard with a 3-speed manual transmission. However, the original owner opted for a Jetaway automatic transmission when they ordered the car at an additional cost of $205.

This particular car has only 81,000 miles on the odometer and they are believed to be original. That’s not a lot of miles in over 50 years!

Oldsmobile sold 2,879 Jetstar Eighty-Eight Convertibles for the 1965 model year at a base price of $3,337 – it was the most expensive model of the series.