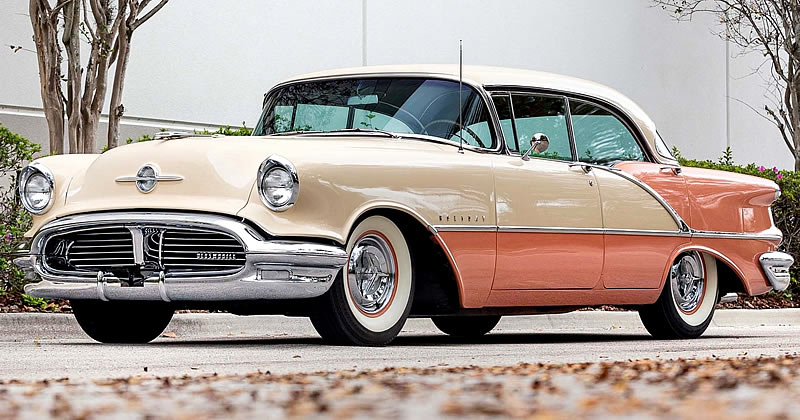 It was the space era and Oldsmobile were certainly heavily into their space and 'Rocket' theme. There was a rocket hood ornament, a rocket emblem on the rear deck and, of course, a "Rocket" engine.

1956 saw a new side trim formation on Oldsmobiles, giving a different look when the two-tone paint was used, there was a new split grille, parking lights were located inside the front bumper and revised projectile taillights were used.

Inside we have an amazing, two-tone tan cloth and vinyl interior. Power comes from the factory 324 cubic inch V8 'Rocket' engine that produced 240 horsepower. This is paired with a Jetaway Hydra-Matic automatic transmission which was a $205 option over the standard 2-speed manual. The Jetaway was an all-new version of the Hydra-Matic automatic transmission. As well and being smoother and more efficient, drivers now had the benefit of a Park position.  Something we take for granted nowadays but prior to this the transmission would be left in Reverse and the handbrake applied. Oldsmobile sold 61,192 Super Eighty-Eight 4-door Holiday Hardtops for the 1956 model year at a base price of $2,881 and was the best selling Super 88. In fact, it was the 2nd best selling model of the entire Oldsmobile range that year.

It was actually a tough year generally for the automobile industry and, despite falling sales, Oldsmobile managed to retain their fifth place in the industry.