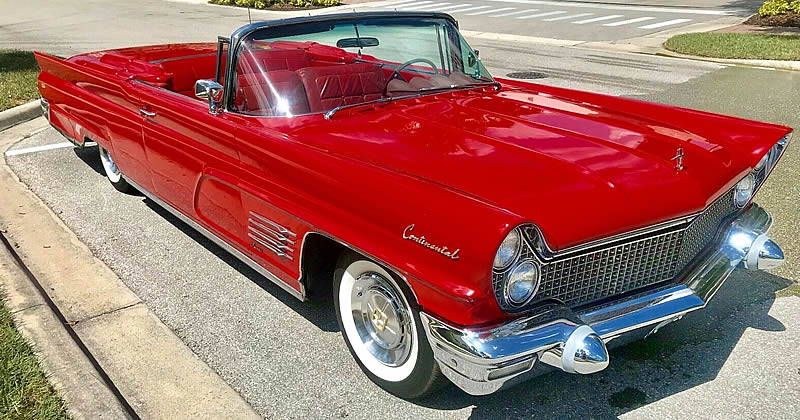 This 1960 Lincoln Continental Mark V was part of the Third generation of Continentals. This period covered 1958-1960 with the cars being labelled Mark II, Mark IV and Mark V successively over that 3 year period. It was a time when opulence reigned and it shows.

This Convertible Continental is a lovely original car in rare Cherokee Red - the original spare is still in the trunk!

1960 saw only minor styling changes with the square look with slab sides remaining along with the distinctive 45-degree twin headlamps. Dagmar bumpers were now also present at the front and the grille was now much finer and mimicked somewhat on the rear panel. At the rear we can see the reverse slant, retractable window, the Breezeway and was the same as found on Mercury models. What's interesting is that it is also featured on the convertible as you can see here.

The interior is all original and stands out as much as the stunning exterior - the red leather seats are very striking! All aspects of the interior contain a high level of detail and nice little touches - something you'd expect of a fine, luxury car.

There were plenty of power options as standard too including: steering, brakes, six-way powered front seat, door locks, windows, and even the vent windows are powered. Pretty much everything Lincoln offered was standard on the Continental including a Travel-Tuner AM radio and tinted glass.

The drivetrain consists of a 430 cubic inch V8 engine with 4-barrel carburetor producing 315 horsepower and Twin-Range Turbo-Drive automatic transmission. This same engine was also now available as an option in the Ford Thunderbird.

Lincoln produced 2,044 Continental Mark V convertibles for the 1960 model year. Prices before options started at $7,056. Aimed at the luxury market these certainly weren't cheap cars and were priced not much under the Cadillac Eldorado Biarritz of the same year. The result was the total production of only 11,086 Mark V cars being made with the 4-door hardtop being the most popular of the six models available.

This Continental is currently for sale on eB﻿﻿﻿ay. (follow the link for even more photos﻿)