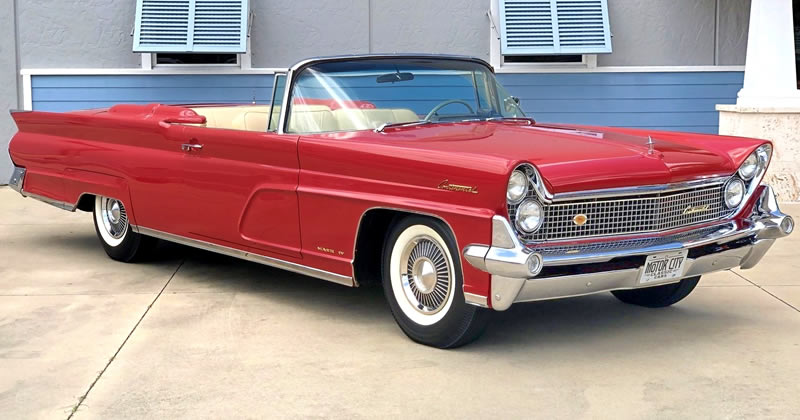 This Bolero Red, Continental Mark IV convertible is an excellent example of one of the finest domestic luxury cars available for the 1959 model year. Having grown in size the previous year the Continental was grabbing a slice of the big, luxury car market.

Despite the name changing from a Mark III to Mark IV, the Continental received only a minor restyling for 1959. Differences included incorporating the canted headlights into the grille area and new bumpers.

Sharing the same 131 inch wheelbase chassis as the Premiere and Capri models together with a common body the Continental varied by some external trim. At the read for example, it featured twin taillights each side along side backup lamps – other Lincoln models used just a single taillight each side.

Inside you’ll find a luxurious all-leather interior (standard on the convertible) along with a Travel-Tuner AM radio as standard equipment in all Mark IV models.

You needed just over $7,000 to buy a Mark IV convertible during the 1959 model year. That was less that $400 cheaper than Cadillac’s Eldorado Biarritz convertible of the same year.

Despite the fact that only 2,195 Mark IV convertibles were sold for ’59 it was still the second most popular of the six models in the line-up that year.

This ’59 Continental Mark IV is currently for sale on eBay. (follow the link for even more photos)