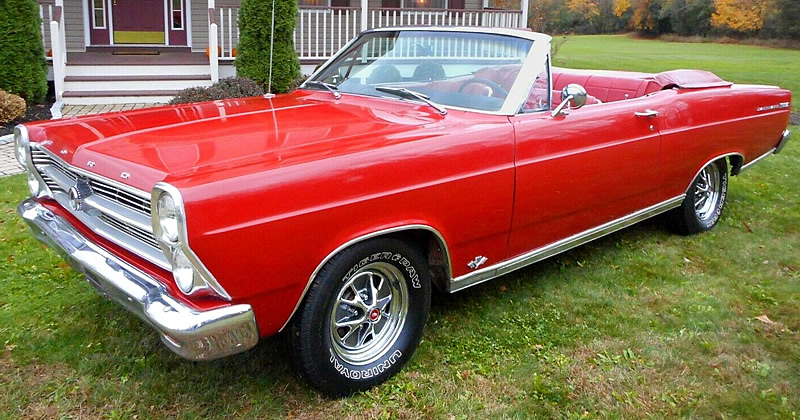 The Fairlane was redsigned all-new for the 1966 model year. The full-size Ford had changed the previous year and the Fairlane was brought inline with this new look which included the stacked dual headlights.

This Fairlane 500 was the intermediate trim level for 1966 with the XL being the sporty version and enjoying a few extras such as bucket seats, center console, rocker panel moldings and special badging.

Inside, we can see the lovely “parchment” bucket seat interior.

Under the hood sits a 289 cubic inch V8 that outputs 200 horsepower. This is paired with a factory 3-speed manual transmission – a $184 option paid for by the original owner. They also opted for an AM radio costing $57 and power steering at $84.

The ’66 restyle helped big engine lovers too. Previously there was only enough room to accommodate a small block V8. Now there was enough room for the 390 big block allowing the Fairlane to join in with the muscle car demand of the late sixties if you went for the GT option.

During the 1966 model year the Fairlane 500 XL Convertible was offered at a base price of $2,768 when equipped with the six cylinder engine. A further $105 got you the 289 cubic inch V8. A total of 4,560 were sold (figure includes sales of both the six and V8) which was about half the number of standard Fairlane 500 convertibles.

This ’66 Fairlane 500XL is currently for sale on eBay. (follow the link for even more photos)