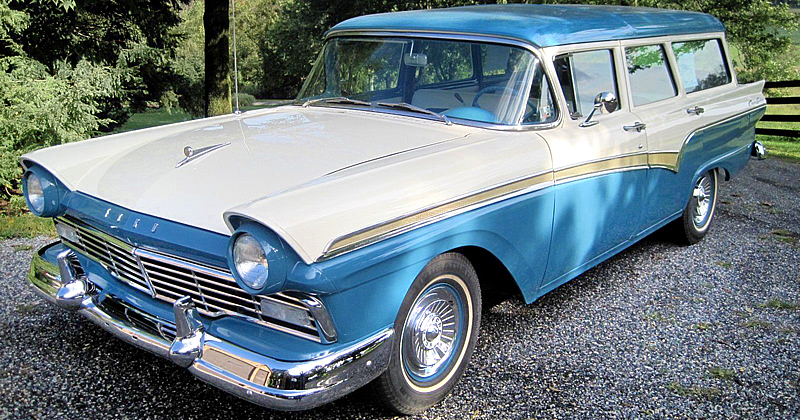 The intermediate level 4 door, 6 passenger Country Sedan was the most popular station wagon of the five models available for the 1957 model year. Ford managed to sell a total of 135,251 of them that year with a grand total of 319,170 station wagons.

Ford outsold Chevrolet this year and produced more than twice as many station wagons.

Station wagons were longer and lower for ’57 and used their own special chassis. There was increased cargo space too – enough to sleep in if you wanted without having to open the rear doors.

This wagon is finished in the factory correct Colonial White and Dresden Blue (code CE).

Inside, there is new but original specification interior.

Under the hood sits the original 292 V8.   It’s been modified slightly as part of this excellent restoration and now features a Thunderbird specification intake manifild and a new Holley carburetor. And, for better reliability the original distributor has been replaced with a electronic ignition distributor. The engine is paired with a Ford-O-Matic Drive automatic transmission.

In addition, the 4 wheel drum brakes have now been replaced with disc brakes all round.