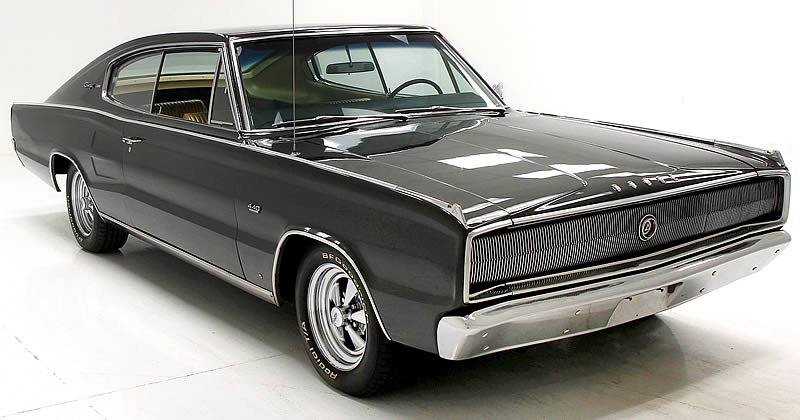 The Dodge Charger introduced in 1966 had remained pretty much the same for the follow-up year. It was fundamentally a Coronet with a fastback roof.

The same body was used and the only visible changes were the fender mounted turn signals. A great way to identify whether a model is a 1966 or 1967.

Dodge described the Charger as a swinging sports model, but family sized.

Inside it was all-vinyl and bucket seats were standard and the center console was shortened from the previous year full-length version to allow easier access to the rear seats. The back seats fold down producing a "sports wagon" with a four by seven and a half foot, fully carpeted cargo area.

Standard power for the Charger was a 440 cubic inch Magnum V8 producing 375 horsepower. It was the biggest capacity of five engines available. This is paired with a Torqueflite automatic transmission - a $176 option at the time.

Dodge produced 15,788 Chargers for the 1967 model year at a base price of $3,128. Interestingly this was a drop in sales of over 21,000 cars from the previous year. Things were to change for 1968 though with a complete restyle that resulted in an increase in sales.

This Charger was also factory fitted with power brakes costing $54 originally. It was built in the built in the St. Louis, MO assembly plant.

This '67 Charger is currently for sale on eBay. (follow the link for even more photos﻿)