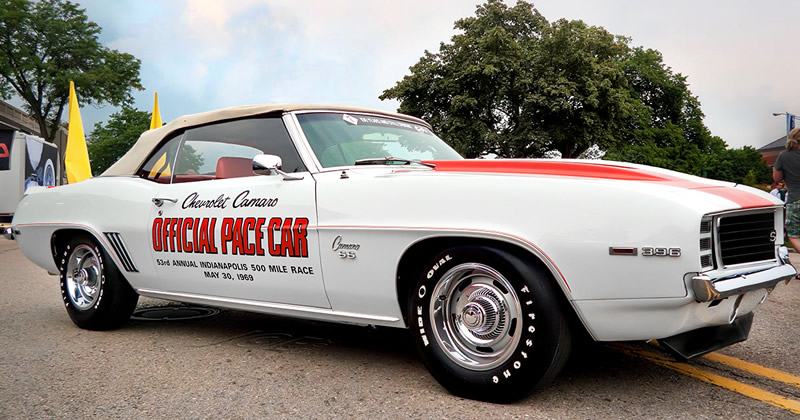 By 1969 the Pony car race was well under way. Sparked off by the Mustang in April 1964, Camaro was Chevrolet's answer and was launched for 1967. Similar to the Mustang, Camaro offered option packages to give customers the opportunity to build a car to suit their needs.

1969 was also a good year because the Camaro was chosen as the Official Pace car for the Indianapolis 500. Not bad, seeing as it was also chosen for 1967! 3 Actual Pace Cars were build. Figures vary but 100 or so official cars were also provided for the Indy Festival and a Courtesy cars. Eventually around 3,675 Official Pace Car replicas were sold.

The actual pace cars were equipped with a 396 V8 whereas most of the replicas were 350 V8s. The convertible option was designated a Z11 identification that is found on the cowl tag. Z10 is how the coupes are identified and there are likely to only 200-300 of them originally made.

Interestingly, the door graphics weren't always installed. The cars were sent to the dealer with them stored in the trunk and only installed at the customer's request.

The Chevrolet Camaro did pretty well in 1969 selling 230,799 units. Compare this to the amazingly popular Mustang that sold 299,824 units that year, it wasn't bad at all.