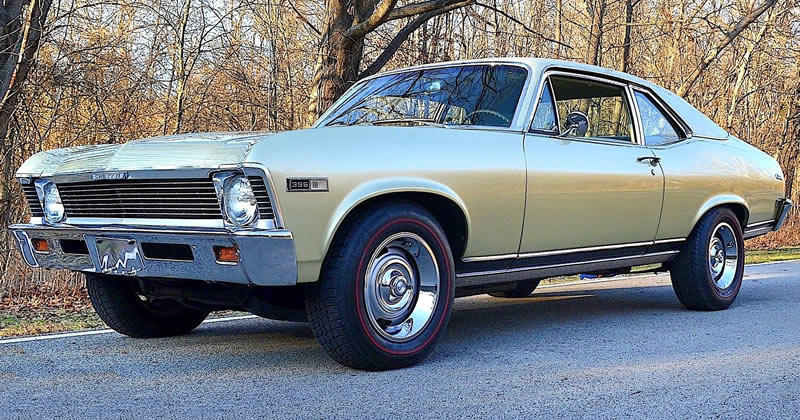 This Chevy II Nova was built in Willow Run, MI during the second week of May, 1968. It’s done just 73,392 miles during its lifetime. Equipped with a 396 V8, this stunning, but fairly restrained car is a bit of a sleeper.

1968 saw Nova’s first major styling change which was a look that was to last for a further eight years. It was now a longer and wider car with another inch added to the wheelbase bringing it to 111 inches.

It was also the year the station wagons were dropped leaving just a 4-door and the 2-door coupe you see here.

All Chevy IIs were now known as Novas. The names Chevy II and Nova were freely interchanged in all of the Chevrolet literature. Front and rear nameplates read “Chevy II” while the rear quarter panels proudly displayed “Nova“.

This is a two tone car painted in Palomino Ivory on the top and Ash Gold on the body (option G-T).

Inside, the interior is option 742 – gold cloth bench (custom).

The standard V8 fitted to the Nova was a 307 cubic inch V8 outputting 200 horsepower. However, the original owner opted for a 396 / 350 horsepower V8 that would have cost them an additional $ when the car was originally ordered. Paired with a Turbo Hydra-matic automatic transmission it is a combination that added $406 to the price. It’s also fitted with power steering, a $84 option and power disc brakes on all four wheels costing $100.

A standard V8 Nova coupe had a base price of $2,367 with a massive 200,970 Novas sold during the ’68 model year. However, this figure includes both body styles and all engine options including the six-cylinder models. Total V8s sold was approximately 53,400 cars.

This ’68 Chevy Nova is currently for sale on eBay. (follow the link for even more photos)