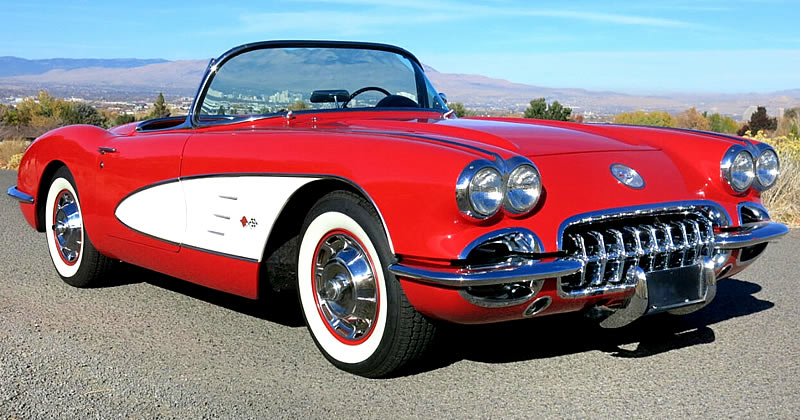 Corvette is as American as the Fourth of July was how Chevrolet was promoting the car in sales literature of the time. It was, and probably still is, America’s true sports car loved by many. Gone too was the criticism from Magazines like Motor Trend who were now comparing the 1959 Corvette to a Porsche.

There were a total of seven exterior colors available for the Corvette in 1959; black, blue, cream, Crown Sapphire, silver white and what many still feel is the best color for a ‘Vette – Roman Red.

Changes were few for the 1959 model year and amounted more to simple refinements of the ’58 models than any sort of revamp. This included losing the hood louvers, a feature that was criticized by some, that would now remain a 1958 only feature. Gone too were the windsplit mouldings on the decklid.

Inside, the ’59 Corvette enjoyed new, more comfortable seating although the glovebox was now gone and replaced with a package tray. Good news for safety though as seat belts were now fitted as standard.

Standard power for the Corvette in 1959 was a 283 cubic inch Super Turbo-Fire V8 fitted with a 4-barrel carburetor. This was mated with a 3-speed manual transmission. However, this car has a 4-speed Muncie manual transmission, a $188 option when the car was ordered new.

This ’59 Corvette is currently for sale on eBay. (follow the link for even more photos)