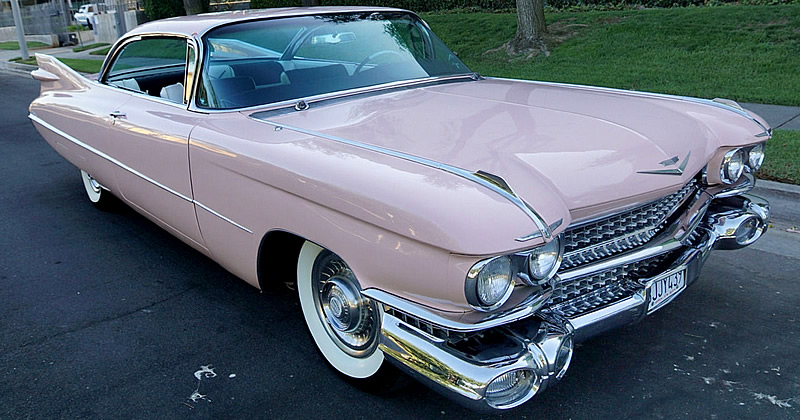 Is this the ultimate fifties car? Perhaps the ultimate in excess and for many, it is their dream car. However you feel about the 1959 Cadillac it is probably up there in the Top 5 most recognizable fifties cars along side classics like the 1957 Chevrolet.

Those extra large tail fins and the dual bullet tail lights make it very easy to identify – you can’t miss them! It’s become an icon of the 50s. Is the ’59 Caddy your ultimate fifties car or was it a step too far?

This 1959 Cadillac Coupe de Ville is mostly original except a repaint in Mountain Laurel, a color that was popular during the 1956 and 1957 model years.

DeVilles are recognizable over the standard 62 series by the presence of script nameplates on the rear fenders.Cadillac made 21,924 Coupe DeVille’s during the 1959 model year. With a base price of $5252 is was definitely aimed at a higher end market. Compare this with a 1959 Chevrolet Impala 2 door Sport Coupe that had a base price of $2599, you can see it is more than double – and Impala was Chevrolet’s higher end range!

This ’59 Cadillac Coupe de Ville is currently for sale on eBay. (follow the link for even more photos)