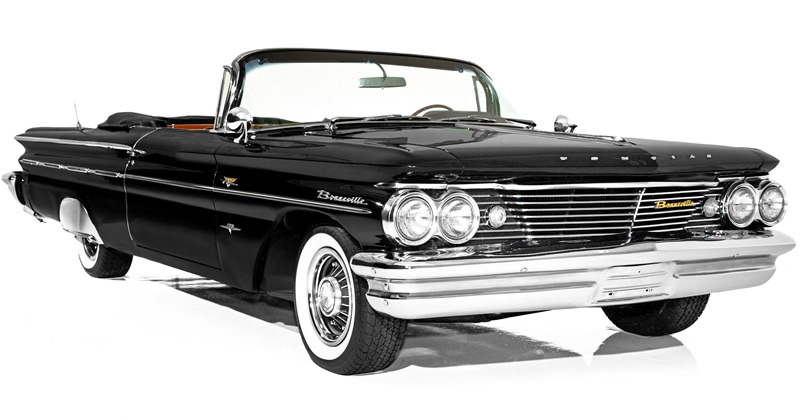 For cruising with both power and style, check out this 1960 Pontiac Bonneville Convertible in Regent Black with black top and red vinyl interior.

Pontiacs were family cars offering a little more luxury than its Chevrolet sibling. Bonneville was Pontiac’s top of the line car so you know it was something a little bit special.

1959 saw the introduction of Pontiac’s Wide-Track – adding five inches to the distance between the wheels on each axle and therefore giving more stability on the road.  This was its second incarnation and was much of the focus of their marketing campaign.

The second generation Bonneville was introduced in 1959 and lasted two years. 1959 was a roaring success with it’s split grille design.  You’d perhaps expect Pontiac to keep with this winning formula. However, changes were already planned and 1960 saw a lot of revisions and it became a one year only body style.

The result was actually a much cleaner look and the split grille was gone. Well, until the following year when the grille was brought back and became a Pontiac signature look right through the sixties.

Pontiac used “Air Foil” styling for 1960 with narrow, horizontal bars for the grille, small round taillamps housed in long tubes that ran down the rear fenders, and the large deck lid was almost flush with the top of the fenders.

Those with a keen eye will notice those aren’t the taillights you’d expect on this car and are actually from a 1959 Cadillac.

Inside there is a beautifully contrasting Tutone Red / Burgundy interior with red vinyl door panels and seats. The bucket seats were an optional extra.

The Bonneville was up against cars like Mercury’s Park Lane, Dodge Polara and DeSoto.

This ’60 Bonneville is currently for sale on eBay. (follow the link for even more photos)