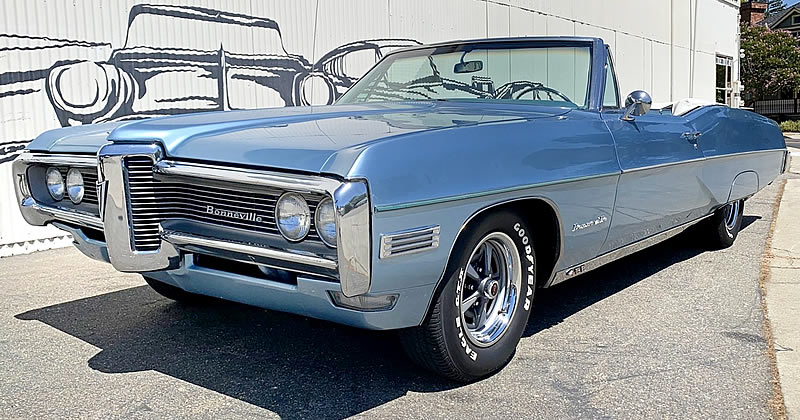 Here’s a beautiful Pontiac Bonneville convertible from 1968 that has done just 86,469 miles in its lifetime. While its striking Alpine Blue paint has been redone in the past, much of the car is original.

Pontiac’s continued use of their split grill design made their cars instantly recognizable. They had however dropped the stacked headlight design. It was a popular feature introduced to their cars back in 1963 but was, by 1968, now looking dated.

These big cars sat on the biggest wheelbase that Pontiac had to offer for 1968 at 124 inches. The Bonneville was the top of the line offering that year.

A Bonneville standard feature was the use of fender skirts.

At the rear the model name is proudly displayed on the deck lid latch panel in block letters. Taillights were very similar to the 1967 models although were now of a single design. The lenses were also longer than the Executive and Catalina cars.

Inside, the interior has received new upholstery and is super clean. The blue and white vinyl complements the exterior perfectly. The Carpathian burled elm on the dash compliments these cars very well and the Bonneville’s plusher carpets extended to the base of the door panels.

’68 was the first year for energy absorbing steering columns. The AM radio you see here was an $87 option. Other options on this car include power brakes and power steering costing $72 and $116 respectively.

Under the hood the Bonneville came standard with a 400 cubic inch V8. The original owner of this car ordered this will the biggest capacity engine that Pontiac had to offer that year – the 428 cubic inch V8 that output 350 horsepower.

The Bonneville convertible had a base price of $3,800 during the 1968 model year. A total of 7,358 were sold that year. This relatively low number was the result of rag top sales tapering off after their heyday of the fifties and early sixties. That’s now something that makes these even more rare and collectable today.

This ’68 Bonneville is currently for sale on eBay. (follow the link for even more photos)