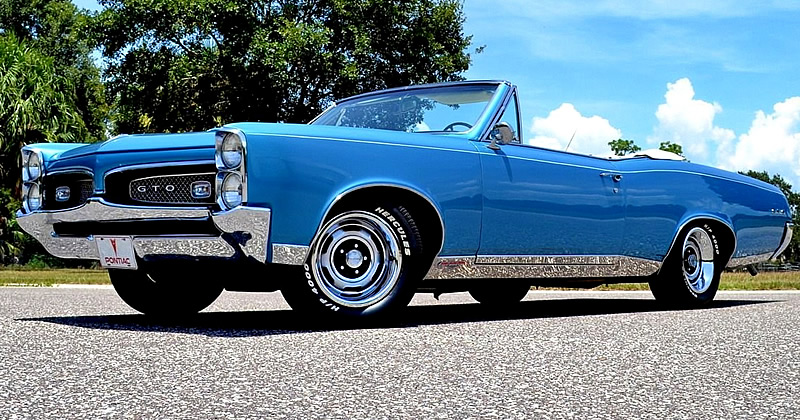 There is not much that can beat an eye-catching sixties muscle car and the ’67 GTO by Pontiac is no exception.

This is the Great One. The ultimate driving machine – or so the 1967 Pontiac brochure described the GTO that year. GTO was a model within the Tempest line-up. Having started off as just an option it became a model in its own right for 1966.

There were three body styles available: A sports coupe (that featured a b-pillar), the hardtop coupe and a convertible that you see here.

New for 1967 was a wire mesh grille and the taillights were changed to form eight rectangles (four on each side) replacing the louvre style from the previous year.

The GTO came with bucket seats as standard and this car was ordered with a center console which would have cost an additional $68. Also ordered with the car when new was a AM / FM radio ($134), power steering ($95) and power brakes ($42).

Pontiac built 9,517 GTO convertibles for the 1967 model year with a base price of $3,165. As the original receipt still exists we know that this particular car cost a total of $3,974.10 with all options, sales tax and delivery charges etc.

This ’67 GTO is currently for sale on eBay. (follow the link for even more photos)