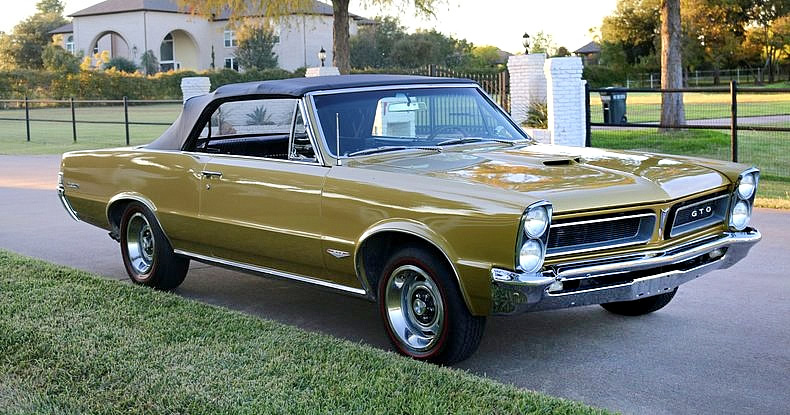 Is this the car the car that started the muscle car explosion? There were certainly other cars available with bigger engines but the GTO, that had been introduced in 1964, was the car that other manufacturers really wanted to compete with.

Looking at this 1965 GTO you can see what all the fuss was about. It really is a great looking car.

Offered as an option package on three of the four Tempest LeMans body styles (not available on the 4-door sedan), the GTO was now in its second year and growing in popularity.

What you got in addition to improved V8 performance was: special trim and identification medallions including six GTO emblems and a blacked out style grille. There were simulated hood scoops, high-rate springs and a longer, larger-diameter rear stabilizer bar.

Inside, they came equipped with all-vinyl bucket seats. The original owner opted for an AM/FM radio which is much rarer than the standard AM version costing more than double at $137.

A 389 V8 was also standard on the GTO together with a dress-up kit and heavy-duty suspension. There were three different versions of the 389 available when the car was ordered; one with a 2-barrel carburetor, a 4-barrel version (which is how this car left the factory) and with tri-power.

This GTO has since been upgraded tri-power with three, 2-barrel carburetors and tuned to now output 477 horsepower.

Following great sales that year the GTO was destined to become its own separate series for 1966.

This ’65 GTO is currently for sale on eBay. (follow the link for even more photos)