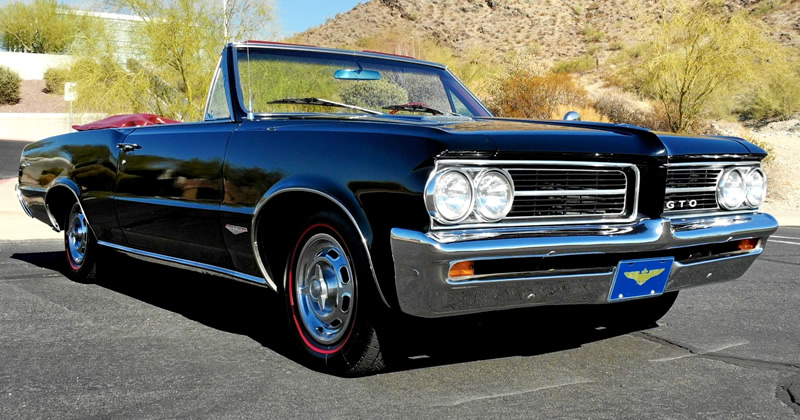 This is the car considered by many to be the first muscle car. The car that got around the General Motors ban of putting big engines in their smaller cars. The 1964 Pontiac GTO or, to give its proper title, the 1964 Pontiac Tempest LeMans with GTO package.

When John Delorean was just an engineer at Pontiac GM put an internal ban on racing (1963). It was time to take the power on to the streets. His team squeezed a 389 engine into a Tempest and, as a new model would need to be signed off by all the division chiefs they made it an option package. So, for $296 you got a GTO added on to your Tempest LeMans order. As well as the 389 V8 buyers got a 3-speed manual transmission with Hurst shifter, all-vinyl bucket seat interior and GTO indification badges around the car.

An idea, inspired by the Ferrari 250 GTO, was to give us the Pontiac GTO or Gran Turismo Omologato. Not just a name and good looks – it would deliver too! It could achieve 0-60 in 6.6 seconds and do the quarter mile in 14.8 seconds.

The car we see here is a fine example of the first GTO in convertible form that has been the recipient of a highly detailed restoration and was in the same hands for 30 years.

Inside, as well as the bucket seat interior, you also got a GTO emblem above the glove box and a engine-turned dash insert.

Under the hood there is a 389 cubic inch V8 with tri-power. Originally the car was purchased with a 4-barrel carburetor but when the engine was given a complete rebuild it was upgraded to tri-power – an option available originally that offered 3 x 2 barrel carburetors

Rather than the standard 3-speed manual transmission that came with the GTO package, the original buyer of this car opted for the Jetaway automatic transmission which would have cost $199 extra.

It is amusing to know that the execs wanted the car production limited to 5000 so Pontiac didn’t get stuck with too many. The GTO went on to get well over 32,000 orders during that first year. Sales more than doubled the following year. Pontiac had a hit on their hands that helped set new model-year production records.

There were 6,644 convertible Tempest LeMans cars ordered with the GTO option for the 1964 model year. It was by far the best seller of the 3 models available with that option. Base price was $3,061.

This ’64 GTO is currently for sale on eBay. (follow the link for even more photos)