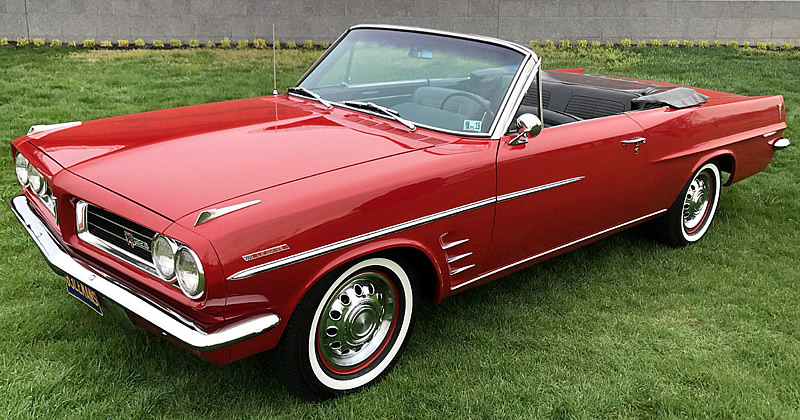 The LeMans started life in 1961 as a trim package for the Tempest but became its own series in 1963. This was actually to last just one year when it was then downgraded to its previous status.

1963 saw some revisions to the Tempest body making it longer and wider while retaining the original 112" wheelbase.

The LeMans Convertible was $188 more than a standard Tempest Convertible. So, what did that extra money buy you?

Well you got twin sun visors (only a drivers side one on the Tempest), deluxe steering wheel, bucket seats, nicer interior and the convertible top was powered. On the exterior there were LeMans identification badges, the taillights were horizontal rather than dual vertically stacked ones and the grilles were partially blacked out. Obviously plenty of people felt it was money well spent as over three times as many opted for the LeMans. As standard these senior compact cars came with a 194.5 cubic inch (3.2 liter) 4-cylinder engine. Over 58% of the convertibles were ordered with this engine.

However, under the hood of this convertible there's a 326 cubic inch V8 engine that outputs 260 horsepower. This is paired with a 3-speed manual transmission. This engine was the high-performance option and would have cost an additional $167 when it was ordered new.

If you wanted a Tempest LeMans Convertible back in 1963 it would have cost you $2,742 plus an options you wanted. Pontiac made 15,957 of them for the 1963 model year. This particular car also has power brakes and power steering costing $108 and $43 respectively. It was built in the Pontiac, MI assembly plant.

Covering the 'Wide-Track' era when Pontiac jumped from the middle of the pack to the number 3 spot just behind Chevrolet and Ford.

Check it out on Amazon
Share5K
Tweet
Pin125
5K Shares