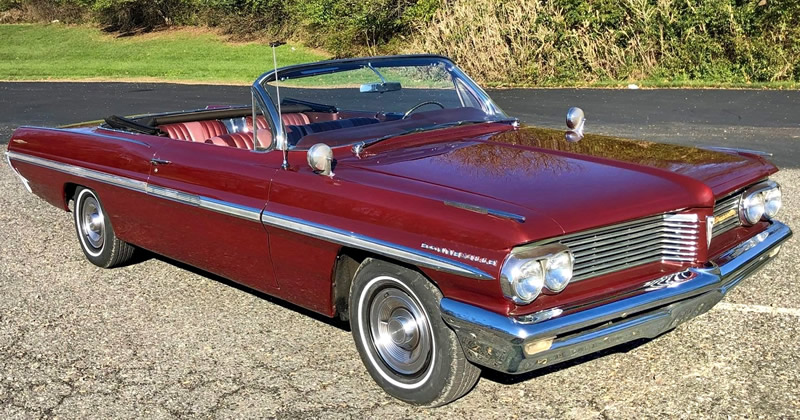 1962 was a great year for Pontiac. They were third place in vehicle production of all the USA manufacturers – a position they would remain in right through to 1970. Their own production was up over 53% compared with the 1961 model year. Their “Wide-Track” cars were proving popular!

Bonneville sat at the top of the Pontiac line-up with the convertible being the 2nd most expensive car they offered during 1962. It was only beaten in price by the Custom Safari station wagon. Pontiacs sat at a level above Chevrolet costing around 15% more when comparing this car to the Impala. The Bonneville was just that little bit more refined.

Chrome side spear moldings run the full length of the car. These contain ribbing in the concave portion. The taillights were all-new for ’62, curving upward in a crescent shape.

There is BONNEVILLE block lettering on the front fenders and under the deck lid at the rear, making it easy to identify.

The Burgundy paint on the outside is perfectly complimented withthe tri-tone Jeweltone Morrokide seats. There is a walnut panel that runs the full length of the instrument panel and the door panels are carpeted at the base. It was much more luxurious than the Catalina and Star Chief beneath it in the Pontiac line-up.

Power comes from a 389 cubic inch Trophy V8 engine putting out 303 horsepower. This is paired with a (new and improved) Hyda-Matic automatic transmission – a $231 option when the car was originally ordered.

This 1962 Pontiac Bonneville is currently for sale on eBay. (follow the link for even more photos)