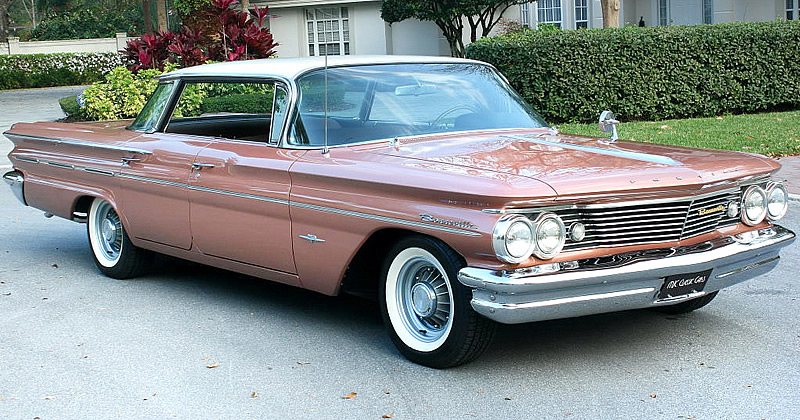 1960 was the second year for the “Wide-Track” Pontiac – the 5 inch widening of their cars’ track to offer more stability. It was the same year their cars got a new look. Interestingly, they had moved away from the split grille that had proved massively popular in 1959. However, this was mainly due to the fact that designs were well underway before they realized what a hit the 1959 cars were.

Those split grilles resurfaced in 1961 and became something of a Pontiac Trademark right through the sixties. Not that there was anything wrong with this single grille design – sales were up in ’60 around 3.5% and this new, clean look proved popular. Part of this modern look involved the removal of fins, bringing Pontiac into the new decade.

This lovely 1960 Pontiac Bonneville Vista Hardtop in Shelltone Ivory over Sierra Cooper Metallic has done just 69,000 miles since it was built in Kansas City all those years ago. Much of this was due to the fact that it spent the last 30 years in museums.

Inside there is a three-tone striped wool broadcloth and nylon with vinyl seating. Notice the cushioned handrail assist on the passenger side of the instrument panel? The Bonneville also came with a custom steering wheel and electric clock and was a top-of-the-line model.

Under the hood there is a 389 cubic inch V8 with Tri-Power (that’s 3 x 2 barrel carburetors). It produced 318 horsepower when paired with the Hydra-Matic automatic transmission that this Bonneville is fitted with. This combination would have cost the original buyer $320 on the base price.

Pontiac sold 39,037 Bonneville Vista Hardtops for the 1960 model year. Costing $3,333 it was by far the most popular of the Bonneville models.