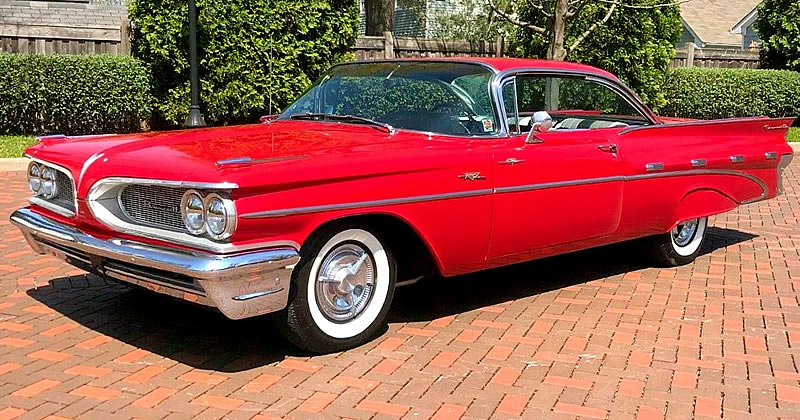 The Sport Coupe was one of four models in Pontiac’s prestigious, top-of-the-line Bonneville line-up during 1959.

Having become it’s own series the previous year, the Bonneville was completely redesigned along with all the other Pontiacs for the the 1959 model year.

It was the year that saw the introduction of the split grille which went on to become one of Pontiac’s distinguishing features for a decade. It’s something you didn’t see on the 1960 models though as they were designed before they realised what a hit they had on their hands.

Another twin was seen at the rear of the car with the new “V” tail-fin design.

Inside, this Bonneville enjoys all-Morrokide vinyl three-tone uphostery. This tri-color styling was used across all Pontiacs with them using this luxurious look for many years to come.

Instrument panels were also redesigned using three large guages mounted inside a raised pod in front of the driver. A Bonneville script was also used in these models and found next to the padded handrail assist bar.

Engine size was also increased for 1959 with all models receiving a 389 cubic inch V8 with five power variants available. The Bonneville came with a 260 horsepower engine with 4-barrel carburetor as standard.

All came with a 3-speed manual transmission as standard with a Super Hydra-matic automatic transmission available as a $231 option.

The original owner of this Bonneville opted for a tri-power setup that used three, 2-barrel carburetors and had a total output of 315 horsepower. This cost an additional $143. They also chose to pair it with the Super Hydra-matic. Other options on this car include power steering and power brakes costing $108 and $43 respectively.

If you had ordered a Bonneville Sports Coupe during the 1959 model year then the base price would have been $3,257 with Pontiac managing to sell 27,769 of them. Total Bonneville sales that year were 82,564.

This ’59 Bonneville is currently for sale on eBay. (follow the link for even more photos)