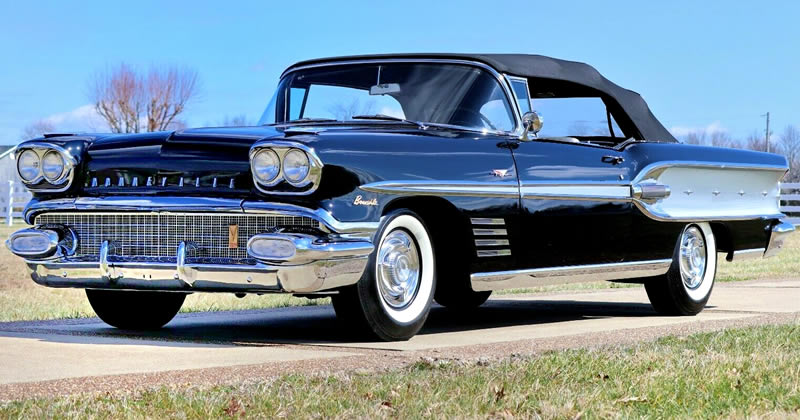 “America’s hot road car” was how Pontiac’s flagship Bonneville was billed in 1958. It was the year that it moved from a model name for the convertible within the Star Chief line-up to it’s own series that now contained also contained a hardtop coupe. Both cars in the series were marketed as sport models.

This beautiful car is painted in Persian Black, one of 12 solid and 34 two-tone colors available for the Bonneville that year. The black convertible top was one of 5 colors available.

The Bonneville used the Chieftain’s shorter 122 inch wheelbase with the Super Chief and Star Chief both using a 124 inch wheelbase.

Twin, circular taillights were used in 1958. Under them were the large, oval-shaped back-up lamps – the driver’s side one hides the gas filler.

Inside, the Bonneville had its own special upholstery with the convertible enjoying a leather interior as standard.

Under the hood the Bonneville came with a 370 cubic inch tempest engine that output 255 horsepower which paired with the standard 3-speed manual transmission (285 hp with the Super Hydra-Matic).

This car however is a bit more special with the original owner opting for the more powerful, “Tri-Power” version equipped with 3 x 2-barrel carburetors that output 300 horsepower. This is paired with the Super Hydra-Matic at an additional cost of $315 when the car was ordered.

Just 3,096 Bonneville convertibles were sold during the 1958 model year. Despite the low number it was actually a significant increase from the 630 cars that were sold the previous year. This might well have been helped by the nearly 38% decrease from ’57 prices meaning it now came in at $3,586.

It did mean however that some of the luxury standard items that were standard were moved to the option list. This car does have power brakes, power steering and deluxe AM radio with power antenna priced at $38, $108 and $99 respectively.

This ’58 Pontiac Bonneville is currently for sale on eBay. (follow the link for even more photos)