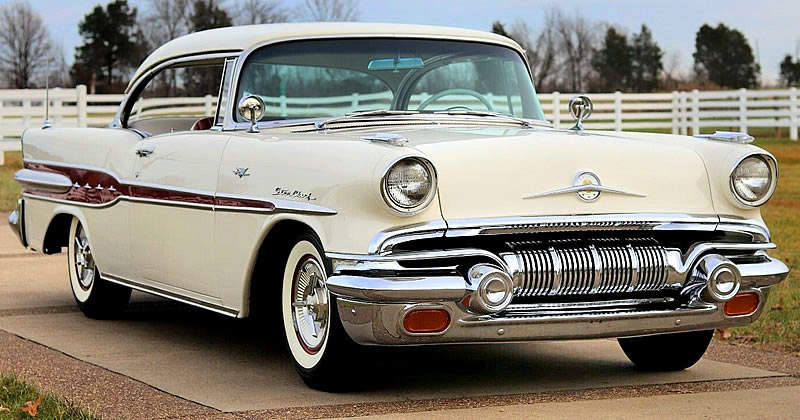 This beautiful 1957 Pontiac Star Chief 2-door Catalina hardtop has been the subject of a complete nut and bolt restoration. The Kenya Ivory paint with Cordova Red accent is a really eye-catching combination.

Star Chief was the premier lineup for 1957 and at this time Catalina was the name given to describe Pontiac’s pillarless hardtop cars.

The Catalina models were the best selling cars in the Star Chief range for ’57. They outsold the other cars by a wide margin. Buyers were definitely drawn to the great lines of a pillarless hardtop preferring the cleaner look.

You can spot a Star Chief easily by the four stars inside the flying rocket side trim – the lesser Chieftain and Super Chief had just three stars.

1957 was the only time that Pontiac used what could actually be described as tailfins.

You can see elements of Chevrolet of the same year although Pontiac received heavier decorative treatment. They were slightly more expensive than a Chevy and arguably offered a more refinement.

There was plenty of chrome inside the Star Chief. Even the door armrest base was chromed.

Under the hood is a 347 cubic inch Strato-Streak engine with 4-barrel carburetor. It came as standard on the Super Chief and the Star Chief and produced 270 horsepower.

Standard for the Star Chief was a 347 cubic inch Strato-Streak engine with 4-barrel carburetor producing 270 horsepower. However, this car was purchased with three, 2-barrel carburetors giving an extra 20 hp.

The original owner of this car also opted to have a Strato-Flight Hydra-Matic automatic transmission costing an additional $231 rather than the standard, 3-speed manual which was standard.

This ’57 Star Chief is currently for sale on eBay. (follow the link for even more photos)