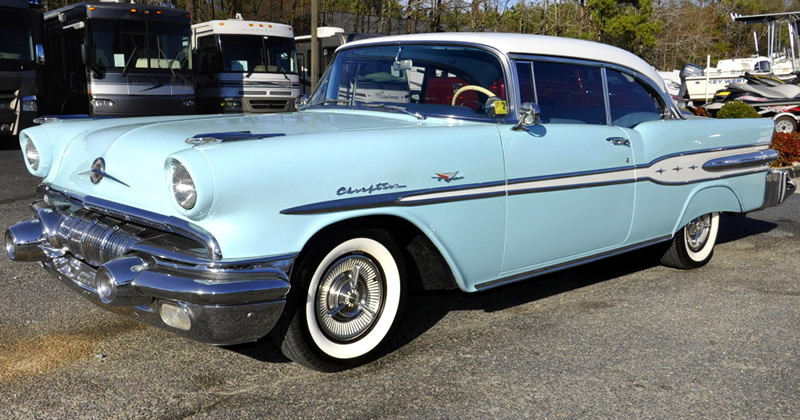 It was 1957 and time for "Star Flight" styling as Pontiac called the look of their new, heavily facelifted cars. It was the late fifties and there was no better place to project the fascination with flight and space than on the cars.

The side trim looked like a missile with the Chieftain and Super Chief being instantly recognizable with three stars inside the rear fender trim - The Star Chief (Series 28) had four. Although weirdly this wasn't true of the Star Chief station wagons because, despite the name, they were actually part of the same series as the Chieftain (Series 27).

The new and revised front grille was sometimes referred to looking like an electric shaver. At the rear, real fins also made an appearance.

The Chieftain was actually the base model in the Pontiac line-up for '57.

Within the Chieftain range there were actually three 2-door cars: a Station Wagon, 2-door Sedan and the car you see here a 2-door Catalina - Pontiac's name for their pillar-less hardtops.

Interestingly, this car has Tri-Power. A 347 cubic inch Strato-Streak V8 engine with 3 x two-barrel carburetors producing a total of 290 horsepower. This is hooked up to a Strato-Flight Hydra-Matic automatic transmission.

The Chieftain would have competed with cars such as the Dodge Coronet and Studebaker President.

Some popular Pontiac options for 1957

Cars of the 50s by Auto Editors of Consumer Guide

Check it out on Amazon
Share5K
Tweet
Pin47
5K Shares