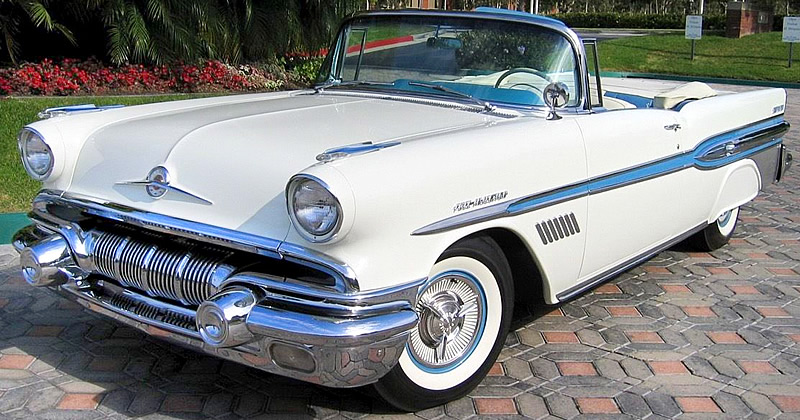 Released mid way through the 1957 model year, Pontiac’s Bonneville was a limited edition, hand-crafted flagship model. It was restricted to one per dealer and only 630 were made.

Strictly speaking, “Convertible” in the title is redundant as in 1957, Bonneville was only used to signify the convertible in the Custom Star Chief Series. Easily identified by the BONNEVILLE in block lettering on the rear fenders these cars also had distinctive trim in the form of seven slanted chrome louvers behind the front wheel opening.

As well as being luxurious models, the big news was that these cars were fuel injected.

As well as being one of the rarest cars of its time this particular Bonneville in Kenya Ivory and Fontaine Blue has only racked up 45,000 original miles.

The inside of the car enjoys the benefits of leather upholstery with the front bench seat having 8-way power adjustment. There are also power windows and a Wonderbar signal seeking radio with power antenna.

Other “luxury” features include: power steering and brakes, tinted glass and a heater and defroster. We might take a heater for granted nowadays but they were a $91 option on the other cars in the lineup that year. All came as standard on the Bonneville. The only option that buyers had remaining was air conditioning.

Clues to what’s under the hood are found on the front fenders and trunk lid in the form of bold, FUEL INJECTION lettering. The 347 cubic inch Strato-Streak, Rochester fuel-injected V8 produced 315 horsepower. This is paired with a 4-speed Hydra-Matic automatic transmission.

If you wanted one of these Bonnevilles when they were new then you’d need a bit of luck due to the limited numbers. You would also need fairly deep pockets as they were priced at $5,782. That was not far off double the price of the Star Chief Convertible.