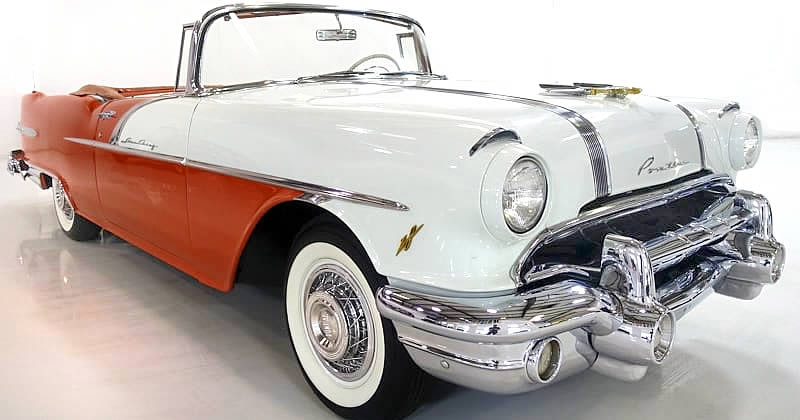 'Come aboard for a flight into the future in the fantastically beautiful Strato-Streak V8 powered 1956 Star Chief Convertible' , was how this car was described in Pontiac's sale literature for the new '56 models.

There was new styling for '56 including newly styled interiors, new rear fender ornaments, hood ornament, grille and bumpers. The front and rear name plates were revised too and were more script-like rather block letters. Essentially this new styling gave a fresh look to the fantastic selling 1955 cars without changing the body. The bodyside trim was placed in such a way as to emphasize the frontal length of the cars.

Star Chiefs have three stylized stars on the deck lid so are easy to spot. This Star Chief is presented here in a lovely paint combination of Polo White over Bolero Red.

Convertibles had a leather interior as standard. 1956 saw a new, larger engine for Pontiac car. Displacement was now 316.6 cubic inches, up from 287 cubic inches the year before. The Star Chief now had 227 horsepower - up from 180 horsepower. This could be paired, as it is here, with a Strato-Flight Hydra-Matic transmission (something else that was new that year) for a further $205. Sales competition for the Star Chief would have come from cars like the Dodge Custom Royal, Mercury Custom, Oldsmobile 88 and the Buick Special etc.

In addition to the optional automatic transmission highlighted above, this car is also equipped with and AM radio costing $90.  If you wanted power steering or power brakes that year they would have cost $108 and $38 respectively.

Despite the cosmetic revisions on their 1956 models, the Star Chief Convertible sold 30% less and Pontiac sales totals were around 150,000 less than the previous year.

This Pontiac Star Chief is currently for sale on eBay. (follow the link for even more photos﻿)