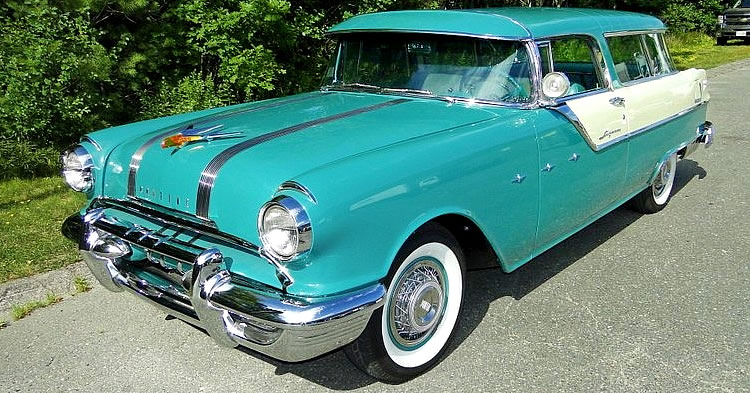 Doesn't this 1955 Pontiac Star Chief Custom Safari look great in Turquoise Blue and White Mist? It's a rare wagon too!

Powered by the 287 cubic inch 'Strato-Streak'  V8 engine and also equipped with optional Hydra-Matic automatic transmission and power steering and brakes. This was the first year for the new overhead valve engine.

1955 saw big changes for Pontiac with completely new chassis and bodies. New split 'Silver Streak' bands that flowed down the hood, a much larger divided bumper, swept style front wheel cutouts and, like a lot of cars this year, a wraparound windshield was introduced. The 1955 Pontiac Safari actually utilized some of the same body components as the Chevrolet Nomad of the same year, this allowed both divisions to share some of the tooling costs.

Under the hood we have a rather immaculate 287 cubic inch Strato-Streak V8 engine outputting 180 horsepower. The Safari used the same upholstery, interior trim and external bright work as the series 28 Star Chief models but used the smaller 122 inch wheelbase, series 27 chassis that the Chieftains used. The Safari was the only model in Star Chief Custom range and was the top station wagon available from Pontiac. Some available Pontiac options in 1955

Pontiac produced just 3,760 Star Chief Custom Safaris for 1955 - the lowest production figure of all the Pontiacs this year, making this a rare car. Base price was $2,962. This car was originally built in Arlington, Texas.

This 1955 Pontiac Safari is currently for sale on eBa﻿﻿y. (follow the link for even more photos﻿)