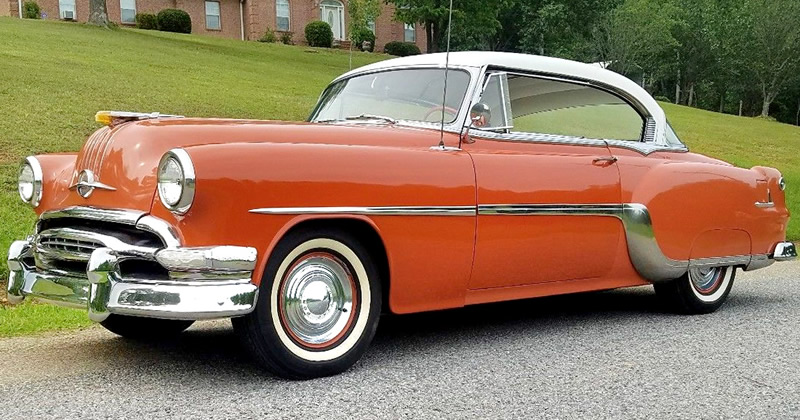 1954 was an interesting year for Pontiac. Sales were down over 30% but it was the year they produced their five millionth car.

After much bigger changes the previous year, Pontiacs saw few changes for ’54. These included a grille change to incorporate a flat over shape in the center, a new hood ornament and thinner silver streaks that ran down the hood and trunk lid.

Inside, the dash of the Catalina matches the external Coral Red paint and the upholstery is Coral and Ivory leather.  To the right, in the circular chrome housing sits an optional electric clock. Above the glovebox sits an emblem featuring the Pontiac Eight designation to highlight it’s more powerful engine option.

Under the hood sits a 268.4 cubic inch straight eight engine (this was a year before Pontiacs would see a V8) that output 127 horsepower when paired with the optional Dual-Range Hydra-Matic automatic transmission that this car is fitted with (a $178 option when the car was bought new).

Other options on this Chieftain include: power brakes ($38), seven-tube AM radio ($80) and a heater / defroster ($81). Power brakes are relatively rare on these cars with it being the first year they were offered!

Apart from the station wagons the Custom Catalina was the most expensive car in the Chieftain line-up at $2,458 with the 8 cylinder engine. Although individual model production figures aren’t available, we do know that a total of 149,986 Chieftain Eights were built during the 1954 model year.