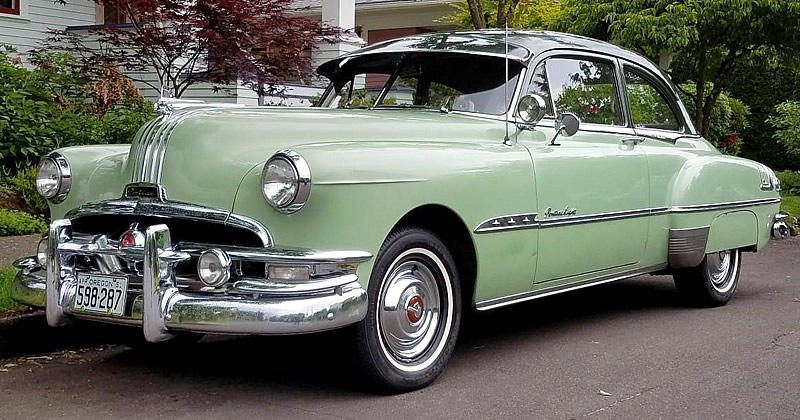 It was Pontiac's 25th Anniversary and the cars were given a minor restyle for 1951. The center bar on the grille now bent downward making way for a cross-hair style piece that contained a Chief Pontiac logo in the center. There was a new Indian hood ornament with stand up feathers too, sitting on top of the Silver-Streak hood decoration that had been around for a few years now..

This 1951 Chieftain DeLuxe Eight 2-door sedan (model 2511D) in Palmetto Green is a lovely example of a first generation Chieftain that had been around since 1949. Along with the Streamliner it was one of the first new designs from Pontiac since the World War II had ended.

DeLuxe cars had side trim molding with a feather at the front and three stars embossed onto it, a chrome gravel guard on the rear fenders, headlight rings and full wheel covers.

Amazingly, this Chieftain still wears its original paint on a body that has never seen a repair.

Power comes from a 248.9 cubic inch 8 cylinder engine with a 2-barrel carburetor and outputs 116 horsepower. This is paired with an automatic transmission.

Exact production figures are a little vague as Pontiac kept track by series not body style. Their series at the time designated the engine size. So, Series 25 was the six cylinder cars and Series 27 was for the Eights. Each included both the Streamliner and Chieftain bodies.

So, we do know that this is one of 251,987 eight-cylinder cars with Hydra-Matic automatic transmission that were sold during the 1951 model year.

This Pontiac Chieftain is currently for sale on eBay. (follow the link for even more photos﻿)