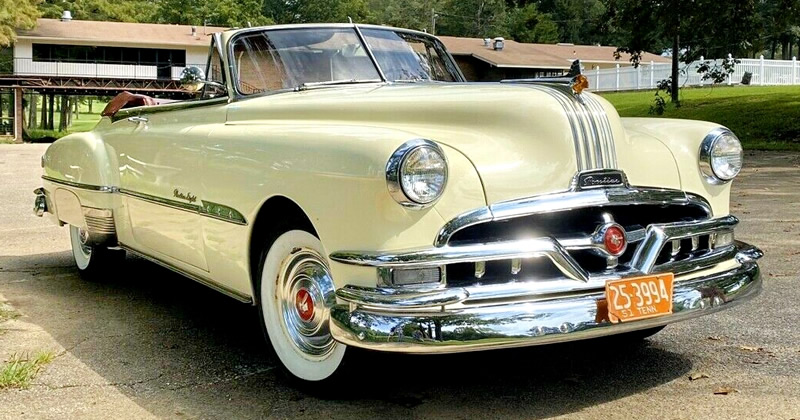 The year was 1951 and it was Pontiac’s Silver Anniversary. However, despite the big occasion their cars were given just a minor revamp.

It was also the year that Pontiac produced their four-millionth car (an eight cylinder hardtop).

The Deluxe Convertible was the most expensive car in Pontiac’s Chieftain lineup for 1951.

Under the hood there is a straight eight “Silver Streak” engine that provides 116 horsepower. This was up 8 horsepower from the previous year. It came standard with a 3-speed manual transmission although the original owner of this Chieftain opted for a Hydra-Matic automatic transmission costing $170 extra.

Pontiacs fitted with an Eight were referred to a Series 27 whereas the sixes were Series 25. Chieftain was considered a car line and not a series.

Production figures are difficult to pin down by model as Pontiac only kept these numbers by engine and transmission. They produced a total of 370,159 cars with 251,987 of these were Eight cylinder with Hydra-Matic transmission. Convertible production would have been just a fraction of that number. Pontiac built 6.7% of America’s convertibles during the 1951 model year.

Back in 1951 a Pontiac Chieftain Deluxe Convertible would have cost you $2388 for the eight cylinder model. If you wanted a six then they came in at $74 less.

This ’51 Pontiac Chieftain Convertible is currently for sale on eBay. (follow the link for even more photos)