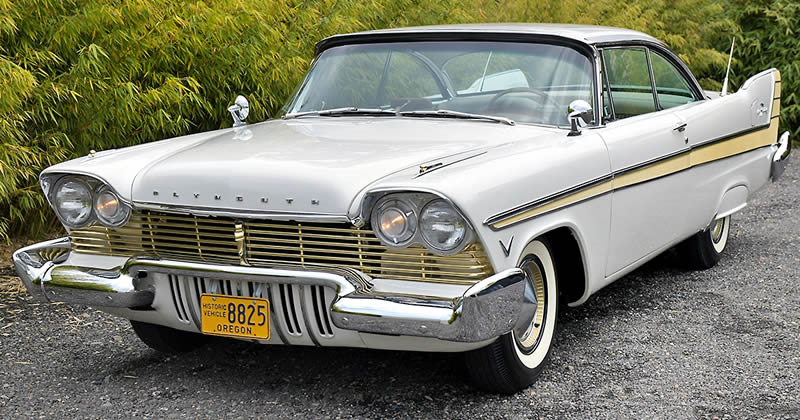 The all-new Plymouth’s for 1957 were headed by the beautiful Fury which was a sub-series of the Belvedere and came with just one model – the 2-door hardtop coupe (Sport Fury).

Available in a single color, Sand Dune White it also featured a distinctive gold anodized aluminum ‘Sport Tone’ side trim that ran the length of the car. That wasn’t the only part of the Fury that got the gold anodized treatment, the grille and the edge of the wheel covers featured it too.

This particular Fury, kept by the original owner for 49 years, was finally sold in 2006. It was then subjected to an absolutely amazing rotisserie restoration with an eye for strict originality. It was completed in 2008 and has traveled just 8 (yes EIGHT) miles since that time.

A nice touch that was offered with the Fury was the inclusion of a name plate mounted in the center of the dash stating, “Built especially for” and then featuring the original owner’s name.

Fins had grown for ’57 and together with the car’s lower stance, contributed to the illusion that the cars were even longer than before. However, they were actually slightly shorter than the previous year.

Under the hood sits the 318 cubic inch V8 with dual, 4-barrel carburetors – a package that produced 290 horsepower. The side mounted air cleaner configuration was only seen for the 1957 model year and were subsequently mounted on top of the carbs.