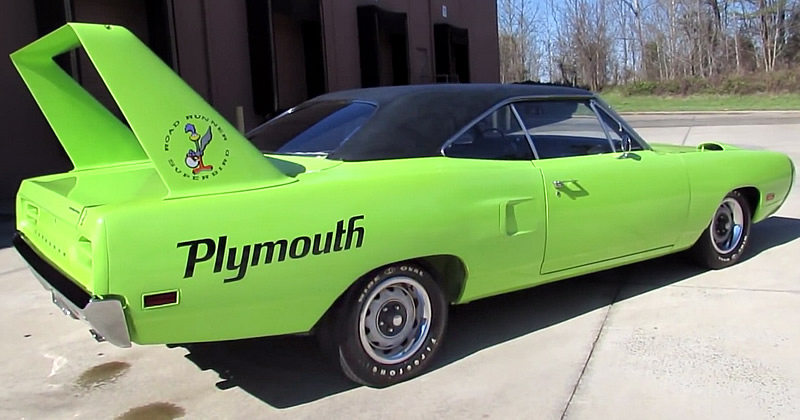 This video takes a good look around a ’70 Plymouth Superbird. This beauty is equipped with a 440 cubic inch V8 with a six barrel carb. Take a look as you get a full look around the car.

The Superbird by Plymouth was a modified version of the Road Runner. Its eye-catching design featured an aero-dynamic nose with concealed headlights and stabilizing wing at the rear.

To qualify for NASCAR one was built for every two dealerships. Official figures say there were just 1,920 of these made (this is debated though with some feeling that nearly 2,800 were made) – either way, you can see why they are so desirable today.

The Superbird was priced at $4,298 and was the most expensive car that Plymouth had to offer during the ’70 model year.

A Superbird could be optioned out like a Road Runner but you’ll notice this one is pretty basic. Amusingly the horn was designed to mimic its namesake, “Road Runner” cartoon character – “Beep Beep!”

We love the color (Limelight) it’s very striking and feel it absolutely epitomizes the era. It might well not be everyone’s ideal, but if you are driving a car like this you might as well not try to blend in with something more muted. It’s weird though because if you painted a much smaller car in this color it just wouldn’t look right.