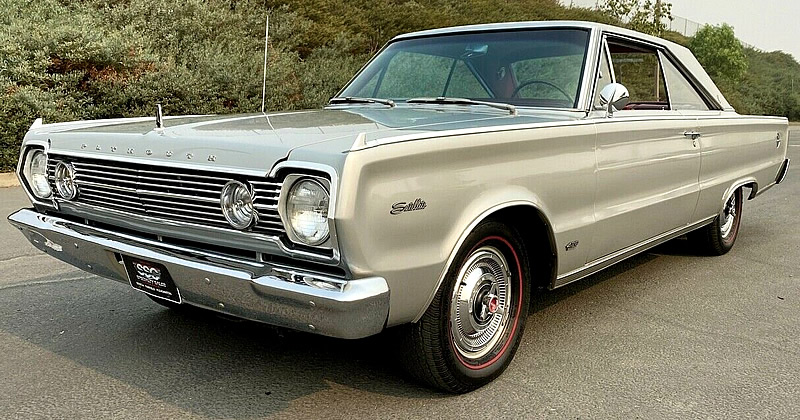 If you like an understated but ultra-rare hemi equipped car then this amazing 1966 Plymouth Satellite is the car for you.

Leaving the factory with the mighty ‘Street Hemi’ 426 cubic inch V8 paired with 727 Torqueflite automatic transmission together with power front disc brakes this is a spec you don’t see very often. Adding to its collectability is the fact that it has done just 71,727 miles during its lifetime.

This Street Hemi was a very slightly tamed version of Mopar’s 426, used two, 4-barrel carburetors and was factory (under)rated at 425 bhp.

Satellite sat at the top of the intermediate Belvedere line-up which was Plymouth’s mid-size range. These cars received a revamp that gave these B-body cars a very angular look that was cleaner than what Dodge was producing.

The front fender badges are the only real clue that something real special is lurking under the hood. While some like the sleeper look, at the time Car and Driver magazine criticized the Hemi equipped cars for not having more distinctive identification.

All Belvedere Satellites came with bucket seats up front with a center console and padded dash.

Prices for the Satellite 2-door hardtop during the 1966 model year started at $2,695. Plymouth managed to sell 35,399 of them but just 817 were Hemi equipped with only 314 having an automatic transmission and only a few left in existence – making this a very rare car!

This 1966 Plymouth Satellite is currently for sale on eBay. (follow the link for even more photos)