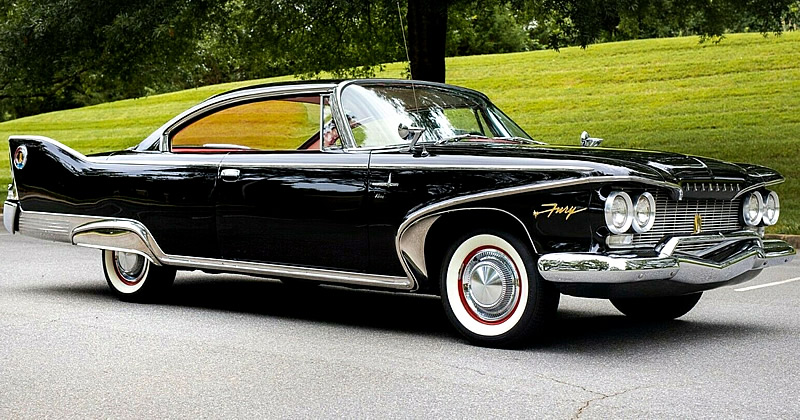 At the rear of the Full-size Plymouths the styling was similar to the previous couple of years, albeit with even bigger fins – quite the opposite of what the rest of Detroit was doing! Well, we call them fins but Plymouth were calling them “stabilizers“.

The 2-door hardtops also offered the “Ski-Hi” rear window that rose much further into the roofline offering the rear passengers a virtual sun roof.

Inside, Fury interiors feature a deeply-contoured effect on the doors and had a choice of seat colors that included; blue, freen, red, caramel and turquoise.

Note the “High Tower” seat back in the driver position designed to offer greater comfort.

Under the hood is a Super Commando 395 which is a 361 cubic inch, 305 horsepower V8. It cost an additional $206 over the standard 318 V-800 that came standard with the Fury. In addition the original owner of this car paid an additional $199 for a TorqueFlite automatic (push-button) transmission rather than the standard 3-speed manual.

Other options on this Fury include power steering and power brakes costing $77 and $43 respectively.

This ’60 Plymouth Fury is currently for sale on eBay. (follow the link for even more photos)