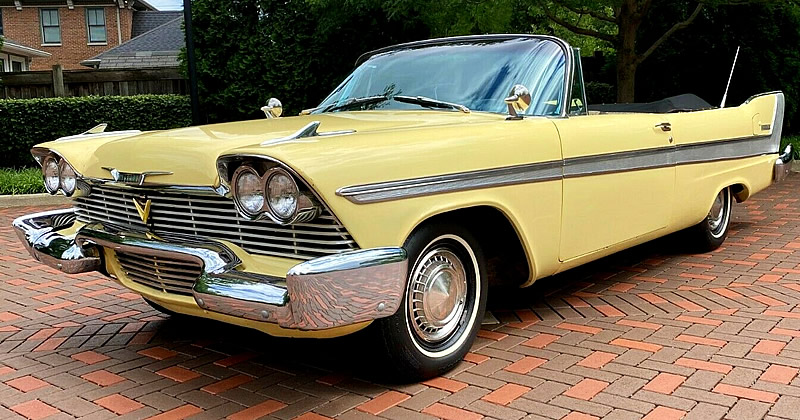 Late fifties Plymouths remain popular with both collectors and casual observers, with the 1958 models drawing particular attention in large part due to the movie Christine.

Here we have a Belevdere convertible, the only convertible in Plymouth’s line-up that year.

1958 was the last year that Belvedere would sit at the top of the line. While the Fury had been around for a few years it was still a sub-series of the Belvedere line. 1959 would see the Fury taking the crown.

Those aren’t really fins you see at the rear – Plymouth called them “Directional Stabilizers“!

At the base of the aluminum tower you’ll notice a single light that acted as taillight, brake light and turn indicator and was also visible from the side.

Inside, this ’58 has been re-trimmed but using material for 1959. Note the push-button transmission selection on the left of the instrument cluster. The dash mounted rear-view mirror was said to give 30% greater visibility.

While the other six Belvedere cars in the line-up for ’58 offered a 230 cubic inch, inline 6-cylinder engine as their standard engine, the convertible came with the 318 cubic inch V8 Fury V-800 (normally $107).

However, the original owner of this Plymouth ordered it with the $216 Golden Commando a 305 horsepower, 350 cubic inch V8 with dual 4-barrel carburetors. Not only that but an additional $220 to have it paired with a TorqueFlite automatic transmission rather than the standard 3-speed manual transmission.

If you wanted to order one of these cars when they were knew prices started at $2,761 with Plymouth selling 9,941 Belvedere convertibles for the ’58 model year.

This ’58 Belvedere Convertible is currently for sale on eBay. (follow the link for even more photos)