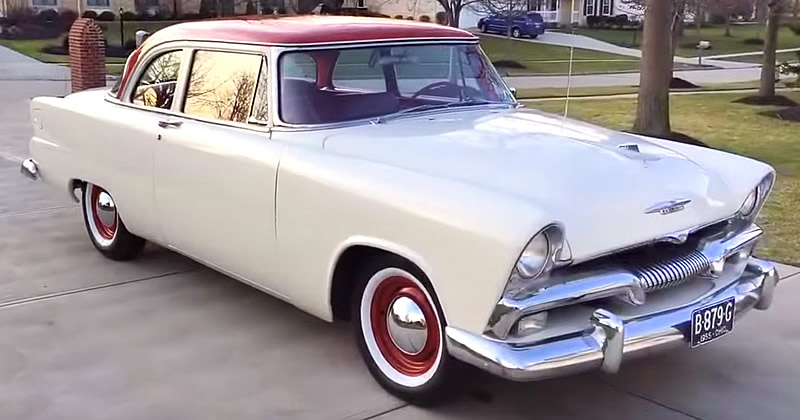 Sitting in the middle of Plymouth’s range for 1955 was the Savoy. Here we have a 2 door Savoy Club Sedan with only 28,000 miles! It looks great in its Orlando Ivory paint with red vinyl and white cloth interior. The cloth was described as Texture-Glo fabric rich with woven flecks of metallic thread.

This car is equipped with a six cylinder 230.2 cubic inch engine (Plymouth’s PowerFlo 6), identifiable even without the hood up as the V8s had V-shaped hood and deck insignia giving this car a P26 series designation.

It is also equipped with a PowerFlite automatic transmission. Notice the dash mounted “Flight-Control” shift lever, this only lasted a year before moving on to push button gear selection in 1956.

It was easy to identify whether a '56 Plymouth was running a six or a V8 by the different style emblems mounted on the hood and trunk.

Note the difference in emblems between the six and V8

74,880 two door Club Sedans were made during the 1955 model year which was less than half the number of four door sedans.