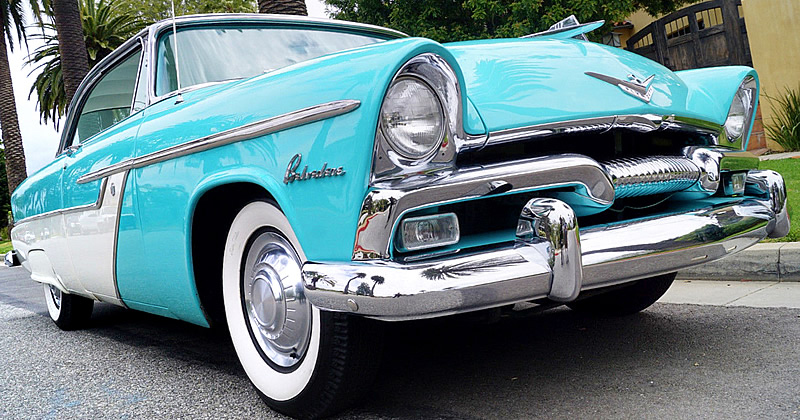 Plymouth cars were all-new for 1955 and far more exciting looking that they had been. It was a much needed change. Just like other Chrysler products they were following the Forward Look - Virgil Exner's styling master plan.

The cars were longer, wider and sat lower, ridding the cars of the previous boxy image.

The Plymouth line-up consisted of three series: The 'Plaza' which was the entry level offereing, the 'Savoy' a mid-priced car and the Belvedere which was the high-priced line and designed to compete with cars such as the Chevrolet Bel Air and Ford's Fairlane. The Belvedere you see here is the 2-door hardtop or "Sport Coupe" as it was also known. Just this model and the convertible had unique 'color-sweep' panels that matched the roof color known as Sportone body trim.

The inside benefited from a much plusher interior including a deluxe steering wheel. Upholstery was a mix of vinyl and cloth. The black and white you see in this example was one of eight combinations available that year.

Located just behind the steering wheel you can see the, new for '55, 'Flite Control Selector' only seen on PowerFlite equipped cars. In the center of the instrument you can see the 8-tube push-button AM radio which was a $83 option. Tucked in on the far left are the two-heater controls. An option back then, a heater would set you back $45 or $70 if you wanted a defroster! Standard power for Plymouth cars was a 117 horsepower six-cylinder PowerFlow engine. The original owner of this car opted for a 260 cubic inch V8 outputting 167 horsepower and costing an additional $103. Also, rather than the standard 3-speed manual transmission, they opted for a PowerFlite automatic transmission adding another $178 to the purchase price.

The six cylinder cars were referred to as the P26 series. They became a P27 if a V8 engine was ordered. V8 cars were instantly recognizable with their hood and trunk emblems. These large "V" shaped medallions with a small "8" in the center of the V were used instead of the flat bar emblems found on the six-cylinder cars.

The styling changes were obviously working as Plymouth experienced a surge in sales for '55 with total output over 50% up on the previous year.

This car is currently for sale on e﻿﻿Bay. (follow the link for even more photos﻿)

Cars of the 50s by Auto Editors of Consumer Guide

Check it out on Amazon
Share2K
Tweet
Pin138
3K Shares