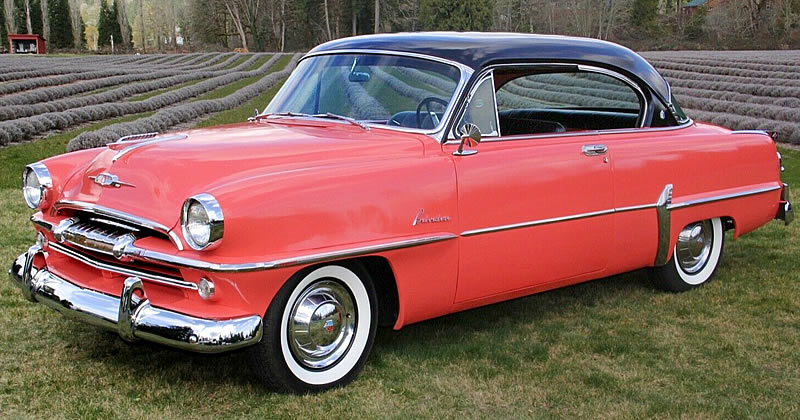 Having been used to describe the pillarless hardtop, the Belvedere name was now being used as a series name in it’s own right, replacing the Cranbrook as Plymouth’s top-of-the-line offering.

Recently restored, this Santa Rosa Coral beauty typifies what was happening to cars as the desire for more vibrant colors during the fifties really took hold.

The “new for ’54” cars were given just minor restyling with new grilles and tailights being the most prominent changes. Also to change was the addition of chrome body side trim that didn’t appear on the 1953 models. The cars did end up nearly 4 inches longer than their predecessors though.

Inside, the interior has been redone with the correct coral and pink striped broadcloth and black vinyl combination. This “Color Tuned” styling gave the new ’54 models a new range of colors that were more vibrant and complimented the exterior colors.

When the ’54 Plymouth cars were first launched they were available only with the trusty 100 horsepower, L-head six-cylinder 217.8 cubic inch engine.

Later during the model year they released a 110 horsepower, 230 cubic inch engine as an option. This car is equipped with one placing it much later in the production run. This is paired with a 3-speed manual transmission, which was standard on all Plymouth cars during the 1954 model year.

This ’54 Belvedere is currently for sale on eBay. (follow the link for even more photos)