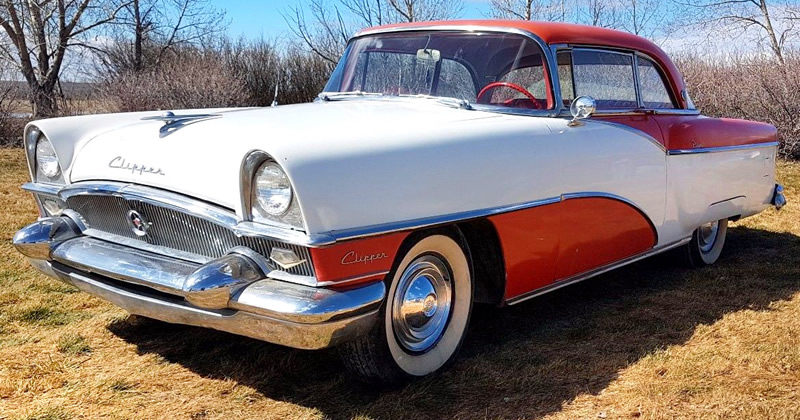 This was a face-lift year simply upgrading the 1951-54 bodies and chassis. Much of this was to do with a lack of funds. Packard was struggling and had just three more year left. However, this new styling gave the cars a lovely, fresh look. This resulted in a 90% increase in sales over the previous year. They had certainly done reasonably well with what they had.

We can see how it all came together in this 1955 Packard Clipper Super Panama Hardtop Coupe. The front fenders now formed a hood over the headlights, there was a new, heavier bumper and  a new wraparound windshield. At the front there was a new mesh grille on the Clipper.

Clippers had model identification on the front fenders and  featured a ships wheel medallion on both the center of the grille and middle of the rear deck. The only Packard identification was found on the right lower corner of the trunk. 1955 saw a new control panel with closely grouped instruments with a metal fascia.  The glove compartment is large and centrally located.  On this car you can see the optional AM radio - a $102 option. Packard did have something new for 1955 - they had dumped their straight eight's and were now offering V8 engines in all their cars. Under the hood there's a 320 cubic inch V8 producing 225 horsepower. It came standard with a 3-speed manual transmission but the original buyer of this car opted for a Ultramatic Drive automatic transmission (new for '55 too) and paid an additional $199.

1955 was the first year of the 12 volt electrical system

This car is currently ﻿﻿for sale on eBay. (follow the link for even more photos﻿)

Long considered among the best cars produced, Packard certainly produced some fine automobiles - particularly during the period from the 1920s to the early 1950s. They came to a sad ending in 1958 - this book illustrates and tells that illustrious story.

Check it out on Amazon
Share4K
Tweet
Pin33
4K Shares