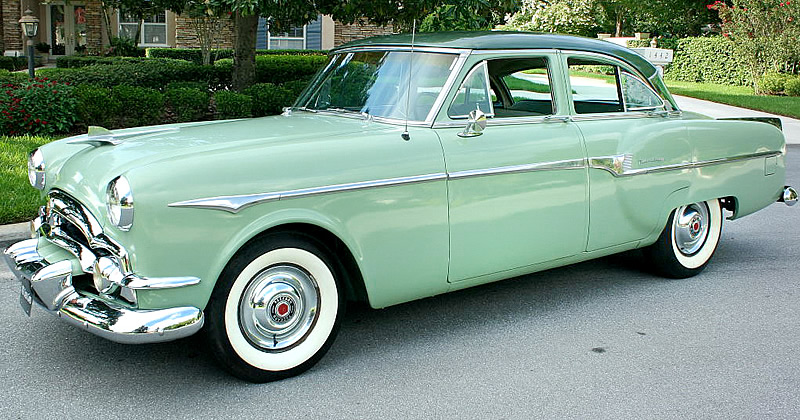 This 1953 Packard Clipper Sedan looks great in Galahad Green over Orchard Green and its only done around 80,000 miles since new.

The Clipper name was reintroduced in 1953 replacing the 200 models. It was Packard’s cheaper line targeting the mid-price field. It very nearly became its own marque but remained with the Packard name after protests from the dealer network. They didn’t want to lose their best seller by losing the Packard name. After all, customers saw it was a great way to enjoy the style of a Packard without the higher price tag of the other models.

The Deluxe offered more features than the standard Clipper models and featured a nicer interior full body side molding, rear fender tip molding and wheel trim rings were standard (although the full wheel covers you see here were a factory option).

Inside the Clipper is a lovely green and tan interior that has been redone using NOS (New Old Stock) materials and therefore maintaining the original feel. The dash is original and you can see in the center that the car was ordered with a push-button radio, costing a further $97 on the purchase price. The original owner of this car opted to have a Ultramatic Drive automatic transmission rather than the standard 3-speed manual, costing them a further $199.

This Packard is currently for sale on eBay. (follow the link for even more photos)