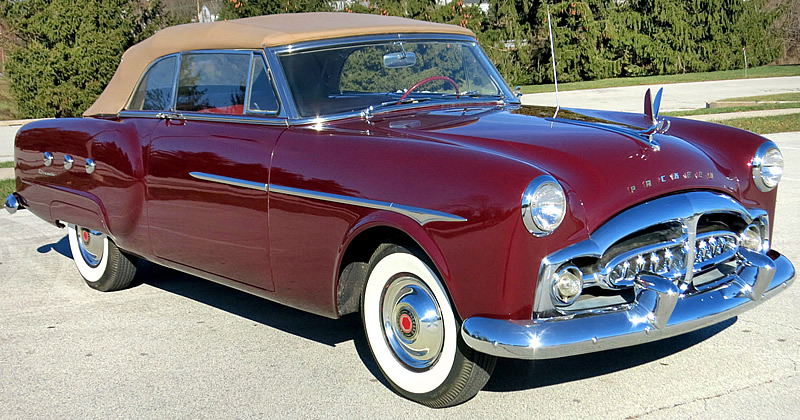 This 1951 Packard 250 Series Convertible painted in Matador Maroon with Tan cloth top has done just 68,000 miles in its life. Quite bright for the early fifties, this was one color of eleven available for the 1951 model year.

A completely new grille was seen for 1951. This convertible features the Cormorant deluxe hood ornament, something that wasn’t standard on the junior series cars.

This was the year Packard was named “most beautiful car of the year” by Society of Motion Picture Art Directors. While the 250 and 200 series were both considered junior models, the 250 Series did have richer appointments such as the three “Ventiports” on the rear fender. It was also the only series to contain a convertible! It would have been intended to compete with cars such as Buick’s Roadmaster, Chrysler New Yorker and Lincoln Cosmopolitan. Packard produced 4,640 Series 250 cars – this figure includes both the convertible and 2-door hardtops. Base price for the convertible was $3,391. Of note is the fact that the 250 series wasn’t added to the line-up until March 1951 – seven months after the introduction of the other models.

This Packard is currently for sale ﻿on﻿ eBay. (follow the link for even more photos﻿)