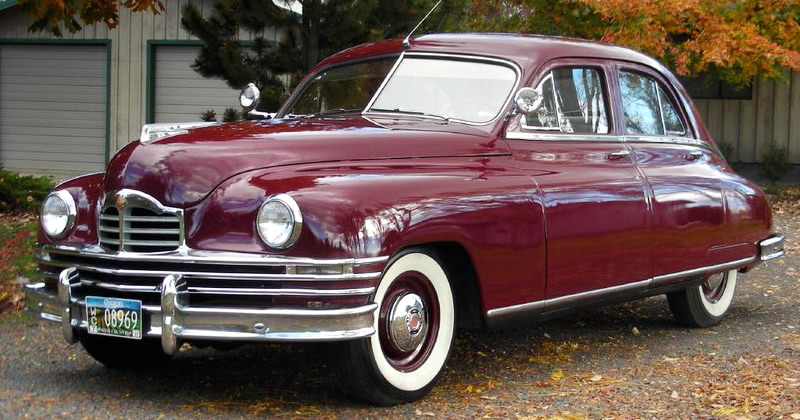 While Packard had less then a decade left, they were still making very fine cars. In fact, they were outselling Cadillac until around about 1950. Despite not being able to respond to Cadillac's new V8 released in 1949, Packard still outsold them by over 23,000 cars.

One of the cars to drive those sales figures up was the Standard Eight such as this 1949 Packard Eight 22nd Series Touring Sedan in Grenadier Maroon.

Packard were somewhat confusing in that they didn't use the model year changeover system at this time. The series 22 cars introduced for 1948 became 1949 cars once they hit November 1st 1948. They continued to be produced until May 1949. After which the Series 23 cars were introduced. Rear view of the Touring Sedan

The easiest way to tell a Series 22 over a Series 23 is the former has a rocker panel molding whereas the latter a chrome spear that ran along the middle of the bodysides.

Travelling in a 1949 Packard was all about luxury and silence. From the beautiful broadcloth seat covers and woodgrain dash to the sound deadened body panels, it was all about the quiet and smooth ride. Power comes from a 288 cubic inch (4.7 liter) straight eight engine producing 130 horsepower. This is paired with a 3-speed manual transmission. It wouldn't be until 1955 that Packard offered a V8. Long considered among the best cars produced, Packard certainly produced some fine automobiles - particularly during the period from the 1920s to the early 1950s. They came to a sad ending in 1958 - this book illustrates and tells that illustrious story.

Check it out on Amazon
Share2K
Tweet
Pin190
2K Shares