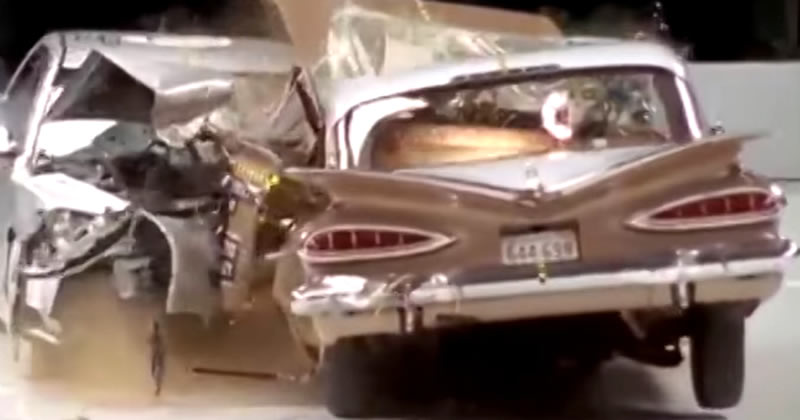 Continuing our “Ouch” series, this one is going to hurt too.

Set up to test the improvements in car safety over 50 years, these two Chevrolet’s were set up for a front crash. We see a 1959 Chevy Bel Air and 2009 Chevy Malibu hurtling towards each other.

With some excellent slow motion shots we can see how the two cars differ in their handling of the impact. The moment of impact

The Insurance Institute for Highway Safety conducted the test to commemorate their 50th anniversary and show how much passenger protection has evolved. You can see that the Malibu crash absorption happens ahead of the windshield. The 59 Bel Air is not so lucky.

As classic car fans, most of us appreciate that our vehicles are not as safe as their modern counterparts. We also tend to drive them very differently and with respect. However, you can’t always rely on “the other guy” and it does make you think.

Whether they committed the ultimate sin by sacrificing this 59 Bel Air is up for debate. We do think that people won’t be mourning the Malibu in quite the same way though.