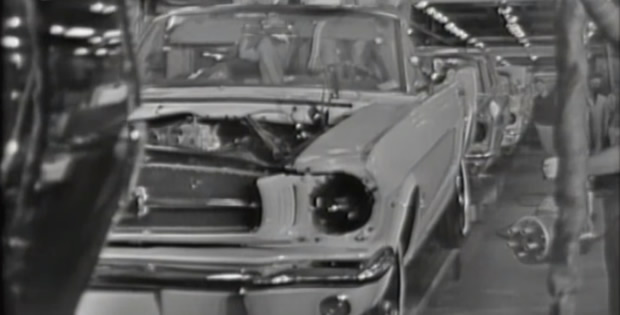 This is a very early promotional “video” and look where they shot it – the Mustang assembly line in 1965. It was for Martha Reeves and the Vandellas, Nowhere To Run hit that reached number 5 in the Billboard R&B singles chart.

We’ve got someone’s brainwave and Ford (probably seeing a great publicity opportunity) to thank for this footage. Great music aside we now have a glimpse into what the production line was like for those early Mustangs.

We’re guessing that health and safety issues would stop this nowadays. If standing up in a convertible while it moves along a raised platform isn’t bad enough, check out the dance through the spray paint line. Things didn’t stop just because they were filming. Check out the engine being fitted as they sing along in the back.

The girls had to get on and off the line while it was fully operational. Apparently the workers were saying, “get these women out of here, we’re trying to make a car”.  Some of them have that look of, “what the hell is going on?”. With Mustangs in such high demand, you can’t imagine Ford wanting to stop for even a moment.

You have to wonder if any of the cars we see here are still around today – we hope so!