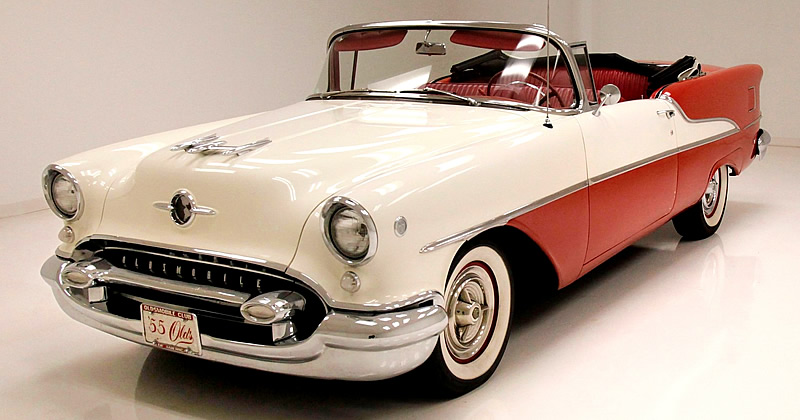 It was 1955 and Oldsmobile were out in front… with the new “Go-Ahead” look! At least that’s what their sales literature was saying. The reality was that it was a minor restyle having revamped the cars completely the previous year.

They had already produced a really great-looking automobile so minor styling changes were enough to give the buyers something a little more fresh. What they did also get was a more powerful “Rocket” engine and plenty more color choices with a total of 75 color combinations (up from 57).

The time was right for plenty of color and the public sure loved them as Oldsmobile sales for the 1955 model year were up nearly 65% from 1954 figures.

The ’55 is instantly recognizable with its distinctive “Flying Colors” tapered teardrop that ran rearward over the rear wheels.

Having had a frame up restoration, this 98,000 mile car looks showroom fresh.

Inside, the convertible Super 88 enjoyed a leather interior as standard.

Under the hood there is a 202 horsepower, 324 cubic inch “Rocket” V8 engine which was the more powerful of the two engines Oldsmobile had on offer for 1955.  This is paired with Hydra-Matic Drive automatic transmission which would have cost an additional $178.

Oldsmobile managed to sell a total of 9,007 Super 88 Convertibles for the 1955 model year at a base price of $2,894. It was the most expensive of the middle series cars. In addition to the Hyrda-Matic transmission mentioned above, this car also benefits from: power steering ($108), Pedal-Ease power brakes ($38), DeLuxe wheel covers ($28) and a DeLuxe radio ($94).

This ’55 Oldsmobile is currently for sale on eBay. (follow the link for even more photos)