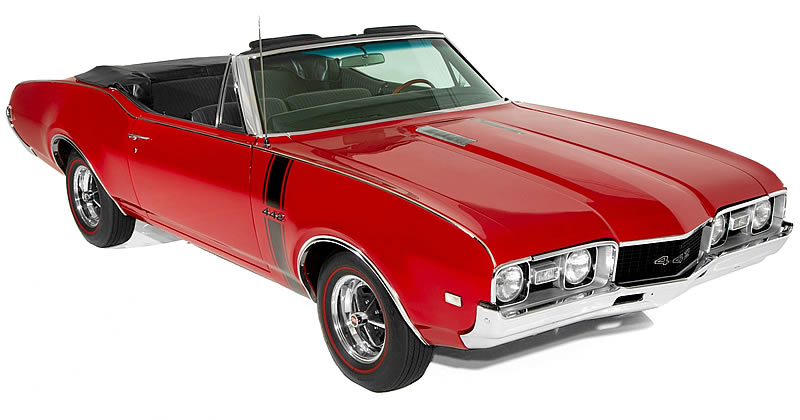 “442 is the Youngmobile for the purist” said the sales literature in 1968. Oldsmobile were trying to freshen up their image and appeal to a younger audience. If any of their models were going to shake off their old image, the 442 was the one to do it.

Available in three body styles, the 442 came as a sport coupe, holiday hardtop and the convertible you see here.

Around since 1964 as an option package for the Cutlass and F-85, the 442 was made into its own series for 1968 (although it returned to an option for the 1972 model year) and given a complete redesign with a cleaner look. Badges now simply used “442” rather than the hyphenated 4-4-2 that was used before. Side marker lights also made an appearance for the first time that year.

The 1968 Oldsmobile 442 was chosen by CARS magazine as the Performance Car of the Year.

A louvered hood, GT pinstriping, concealed windshield wipers were all standard. The convertible is came with a real glass rear window.

Inside, the 442 came with bucket seats as standard but could be ordered with bench seats.

Based on the Cutlass, the 442 came with a heavy duty suspension and power coming from a 400 cubic inch, 350 hp V8 Rocket engine with four-barrel carburetor. This particular car has been upgraded with a mighty 455 cubic inch for some truly brute power.

This is an original factory 4-speed car with a Muncie M20 4-Speed Manual Transmission (a $189 option at the time).

Oldsmobile built 5,142 Convertible 442 cars for the 1968 model year at a base price of $3,341. This particular car was built in the Lansing, MI assembly plant and options include an AM/FM radio ($238) and electric clock.

This ’68 442 Convertible is currently for sale on eBay. (follow the link for even more photos)