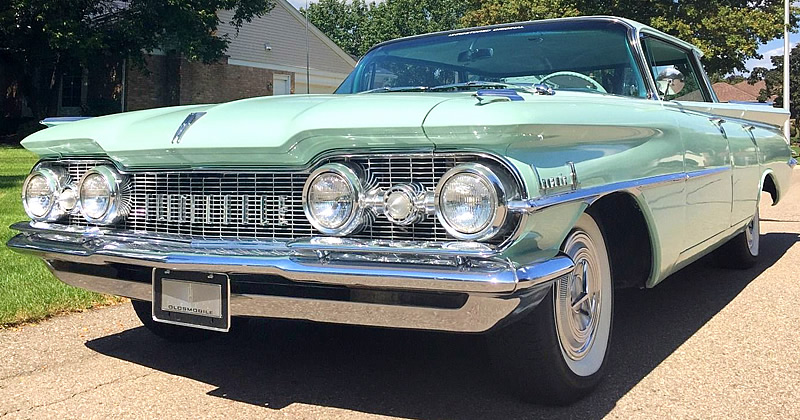 After the big and bold 1958 restyle, Oldsmobile buyers were treated to another complete revamp for the 1959 model year too. After a very chrome heavy year it was substantially reduced.

A full ten inches was added to the cars as part of Oldsmobile’s “Linear Look”. A look that also offered considerable added visibility.

The new look included both large sloping semi-fastback and flat top style rooflines. In this Dynamic 88 Holiday Hardtop we can see the distinctive flat roof and massive expanse of glass that wraps right around in line with the rear doors.

At the rear the cars featured a new sloping deck and oval taillight assembly. The trunk was wider, deeper and longer and gave around 64% more storage space. What looks like an exhaust pipe outlet at each end of the bumper is actually the backup lights.

The wonderful and original interior of this Dynamic 88 still has the original plastic seat covers on it that have been there since it was new. Under the hood is a 371 cubic inch “Rocket” engine that outputs 270 horsepower (that’s 5 more than the previous year). This is paired with a Jetaway Hydra-Matic automatic transmission that would have cost an extra $231 over the standard 3-speed manual.

The 4-door Holiday Hardtop Sport Sedan was the second best seller of the Dynamic 88 models with Oldsmobile selling 48,707 of them. The base price was $3,036.

This Dynamic 88 is currently for sale on eBay. (follow the link for even more photos﻿)