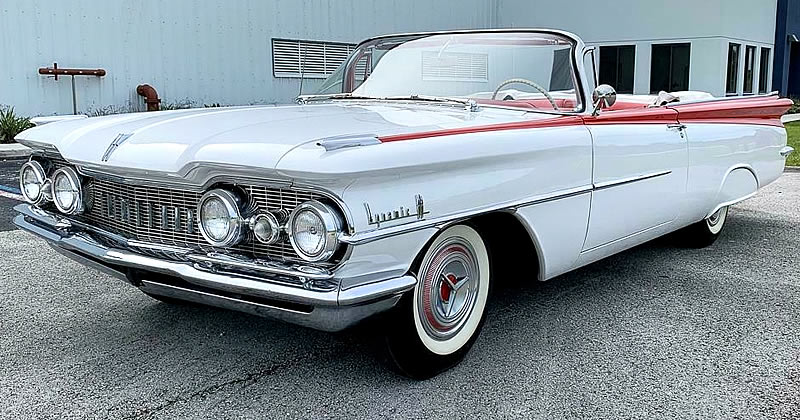 The most distinctively different models in our 61-year history was how Oldsmobile described their new for '59 cars. It was the second year in a row too that buyers saw dramatic changes. It was longer, lower, wider with a look they referred to as the "Linear Look".  So, let's take a look at a fantastic 1959 Oldsmobile Dynamic 88 Convertible!

The front end was extensively redesigned. The grille was very much the focus with a massive expanse running the full-width of the car. It now contained the headlamps, parking lights and there was even room to spell out OLDSMOBILE in bold letters along the middle.

After what appeared to be an explosion of chrome on 1958 cars, the 1959 models wore much less of it. Also new for 1959 was the 46% larger Vista-Panoramic Windshield offering greater visibility.

Oval taillights sit at the back of a rather flat looking tailfin that starts as a body-side crease all the way at the A-pillar at the front. This is then crowned along the top with another small fin. What look like they could be exhaust vents are actually backup lights on each end of the rear bumper. The center of the bumper just above the license plate there is the fuel filler door. The trunk space was increased 64% up from the previous year and is absolutely huge and perfect for vacations.

Flick the switch for the power top and you reveal the interior in all its glory. Inside we have a two-tone red and black vinyl interior. The transmission is the correct Jetaway Hydra-Matic 4 speed automatic which was a $231 option at the time of original purchase. Also fitted to this car is Roto-Matic power steering a $108.

Oldsmobile produced just 8,491 Dynamic Eighty-Eight Convertibles for the 1959 model year at a base price of $3,286. Despite the relatively low number it was the best seller of all three convertibles that Oldsmobile had to offer and almost double the sales of the previous year.

​Enjoy the video below