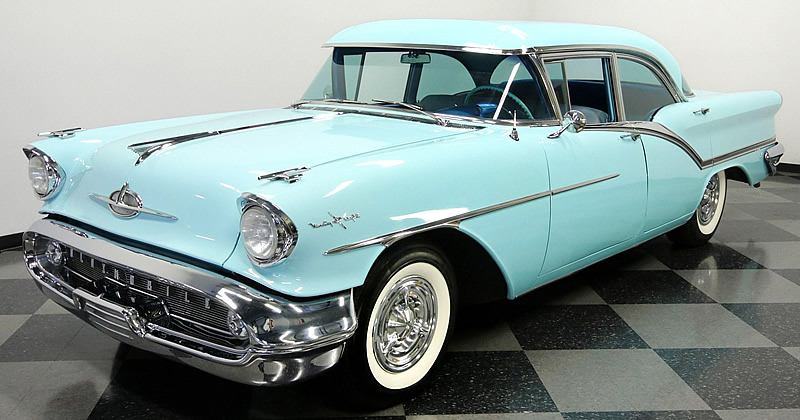 Oldsmobiles were redesigned for the 1957 model year giving a wider stance and much lower look. It was a look that had also ignored fins that were appearing on just about every other car of the period. They also had more powerful engines and a power package (the J-2) was available – which is exactly what’s fitted to this 1957 Oldsmobile Starfire Ninety-Eight Holiday Hardtop Sedan in Banff Blue that has done under 52,000 miles in its life.

The Starfire name was used for Oldsmobile’s Ninety-Eight Convertibles from 1954-1956. For 1957 it was used as a prefix for all models in the Ninety-Eight series.  For some reason this was a one-year only affair and in 1958 they were back to plain “Ninety-Eight” once more.

A three-piece, twin-strut rear window had made a reappearance. The oval taillights hide the gas filler and the dual exhausts exit through the rear bumper.

Engines were bigger this year with the introduction of a 371 cubic inch T-400 Rocket V8.  In addition this car has the J-2 power package with 3 x 2-barrel carburetors producing 300 horsepower. Under normal driving only the center carburetor operates. This is paired with a 4-speed ‘Jetaway’ automatic transmission.

The optional Deluxe radio offers powerful six-tube full-fidelity reception. The front speaker is centrally located at the base of the windshield, which acts as a sound reflector!

The Ninety-Eight was top-of-the-line for Oldsmobile and enjoyed standard features such as: an automatic transmission, power brakes and power steering.

Oldsmobile produced 32,099 Ninety-Eight Holiday Hardtop Sedans for the 1957 model year at a base price of $4,013. The car featured here was originally built in the Lansing, Michigan assembly plant.

This ’57 Oldsmobile Ninety Eight is currently for sale on eBay. (follow the link for even more photos)