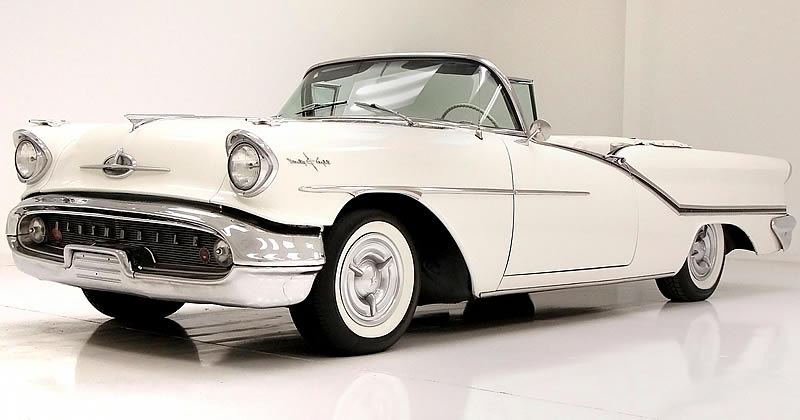 A convertible with the optional J-2 Rocket engine, this 1957 Oldsmobile Starfire Ninety-Eight is one truly desirable fifties car.

For 1957, Oldsmobile put “Starfire” in front of the Ninety-Eight Series name, presumably to give an even more Space Age image that was so prevalent in the fifties. Similarly the plain Eighty-Eight Series now gained the “Golden Rocket” nomenclature. This was a one-year only change and things were back to the way they were for 1958.

At the rear, Oldsmobiles had new stylish oval taillights with a concealed gas filler. Dual exhausts were vented through the bumper.

1957 was also a big year of change for Chrysler and Ford who produced some spectacular automobiles hitting GM relatively hard. Oldsmobile ultimately suffered a 20% downturn on the year before despite holding their fifth place position in auto sales.

Painted in its original Alcan White with black accent stripe this 98 is very striking. Inside is the factory two-tone leather interior in black and white.  The front seat is powered which was also a standard feature of the convertible.

The dash was revised for 1957 while maintaining the pod cluster for the instruments and there was plenty of chrome!

Other options on this car include: Wonderbar Super Deluxe signal seeking radio ($121) and power brakes ($37).

Under the hood we find the new, more powerful Rocket engine that was launched in 1957. At 371 cubic inches it was 47 cubic inches bigger than before with the standard engine producing another 15% horsepower. This particular one is a bit more special as it is the J2 option with three, two-barrel carburetors producing 300 horsepower. All this extra power could be had for just an extra $83.

When combined with the 4-speed Jetaway Hydra-Matic automatic transmission that the original owner of this car opted for, it added an extra $314 to the cost of the car.

The Starfire Ninety-Eight Convertible (model 3067DX) was the best selling convertible for Oldsmobile during the 1957 model year. If you wanted one back then the base price was $4,217.

This ’57 Oldsmobile 98 is currently for sale on eBay. (follow the link for even more photos)